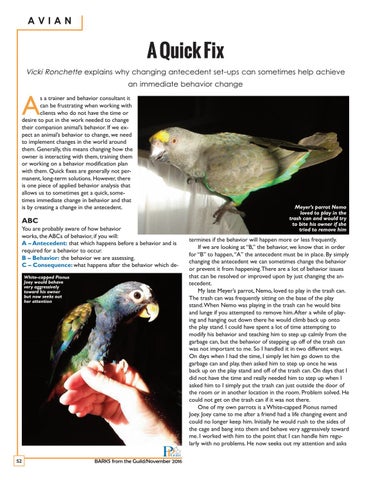 s a trainer and behavior consultant it can be frustrating when working with clients who do not have the time or desire to put in the work needed to change their companion animal’s behavior. If we expect an animal’s behavior to change, we need to implement changes in the world around them. Generally, this means changing how the owner is interacting with them, training them or working on a behavior modification plan with them. Quick fixes are generally not permanent, long-term solutions. However, there is one piece of applied behavior analysis that allows us to sometimes get a quick, sometimes immediate change in behavior and that is by creating a change in the antecedent.

You are probably aware of how behavior works, the ABCs of behavior, if you will: A – Antecedent: that which happens before a behavior and is required for a behavior to occur. B – Behavior: the behavior we are assessing. C – Consequence: what happens after the behavior which deWhite-capped Pionus Joey would behave very aggressively toward his owner but now seeks out her attention

termines if the behavior will happen more or less frequently. If we are looking at “B,” the behavior, we know that in order for “B” to happen, “A” the antecedent must be in place. By simply changing the antecedent we can sometimes change the behavior or prevent it from happening. There are a lot of behavior issues that can be resolved or improved upon by just changing the antecedent. My late Meyer’s parrot, Nemo, loved to play in the trash can. The trash can was frequently sitting on the base of the play stand. When Nemo was playing in the trash can he would bite and lunge if you attempted to remove him. After a while of playing and hanging out down there he would climb back up onto the play stand. I could have spent a lot of time attempting to modify his behavior and teaching him to step up calmly from the garbage can, but the behavior of stepping up off of the trash can was not important to me. So I handled it in two different ways. On days when I had the time, I simply let him go down to the garbage can and play, then asked him to step up once he was back up on the play stand and off of the trash can. On days that I did not have the time and really needed him to step up when I asked him to I simply put the trash can just outside the door of the room or in another location in the room. Problem solved. He could not get on the trash can if it was not there. One of my own parrots is a White-capped Pionus named Joey. Joey came to me after a friend had a life changing event and could no longer keep him. Initially he would rush to the sides of the cage and bang into them and behave very aggressively toward me. I worked with him to the point that I can handle him regularly with no problems. He now seeks out my attention and asks