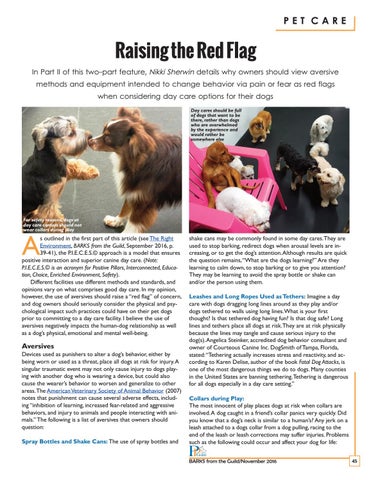 In Part II of this two-part feature, Nikki Sherwin details why owners should view aversive methods and equipment intended to change behavior via pain or fear as red flags when considering day care options for their dogs Day cares should be full of dogs that want to be there, rather than dogs who are overwhelmed by the experience and would rather be somewhere else

For safety reasons, dogs at day care centers should not wear collars during play

s outlined in the first part of this article (see The Right Environment, BARKS from the Guild, September 2016, p. 39-41), the P.I.E.C.E.S.© approach is a model that ensures positive interaction and superior canine day care. (Note: P.I.E.C.E.S.© is an acronym for Positive Pillars, Interconnected, Education, Choice, Enriched Environment, Safety). Different facilities use different methods and standards, and opinions vary on what comprises good day care. In my opinion, however, the use of aversives should raise a “red flag” of concern, and dog owners should seriously consider the physical and psychological impact such practices could have on their pet dogs prior to committing to a day care facility. I believe the use of aversives negatively impacts the human-dog relationship as well as a dog’s physical, emotional and mental well-being.

Devices used as punishers to alter a dog’s behavior, either by being worn or used as a threat, place all dogs at risk for injury. A singular traumatic event may not only cause injury to dogs playing with another dog who is wearing a device, but could also cause the wearer’s behavior to worsen and generalize to other areas. The American Veterinary Society of Animal Behavior (2007) notes that punishment can cause several adverse effects, including “inhibition of learning, increased fear-related and aggressive behaviors, and injury to animals and people interacting with animals.” The following is a list of aversives that owners should question: Spray Bottles and Shake Cans: The use of spray bottles and

shake cans may be commonly found in some day cares. They are used to stop barking, redirect dogs when arousal levels are increasing, or to get the dog’s attention. Although results are quick the question remains, “What are the dogs learning?” Are they learning to calm down, to stop barking or to give you attention? They may be learning to avoid the spray bottle or shake can and/or the person using them.

Leashes and Long Ropes Used as Tethers: Imagine a day care with dogs dragging long lines around as they play and/or dogs tethered to walls using long lines. What is your first thought? Is that tethered dog having fun? Is that dog safe? Long lines and tethers place all dogs at risk. They are at risk physically because the lines may tangle and cause serious injury to the dog(s). Angelica Steinker, accredited dog behavior consultant and owner of Courteous Canine Inc. DogSmith of Tampa, Florida, stated: “Tethering actually increases stress and reactivity, and according to Karen Delise, author of the book Fatal Dog Attacks, is one of the most dangerous things we do to dogs. Many counties in the United States are banning tethering. Tethering is dangerous for all dogs especially in a day care setting.” Collars during Play: The most innocent of play places dogs at risk when collars are involved. A dog caught in a friend’s collar panics very quickly. Did you know that a dog’s neck is similar to a human’s? Any jerk on a leash attached to a dogs collar from a dog pulling, racing to the end of the leash or leash corrections may suffer injuries. Problems such as the following could occur and affect your dog for life: BARKS from the Guild/November 2016