BARKS from the Guild November 2015 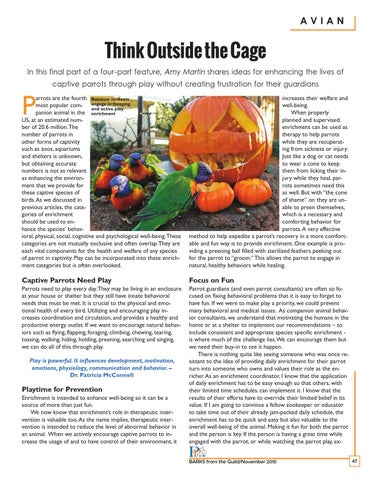 Think Outside the Cage

In this final part of a four-part feature, Amy Martin shares ideas for enhancing the lives of

captive parrots through play without creating frustration for their guardians

arrots are the fourth Rainbow lorikeets in foraging most popular com- engage and active play panion animal in the enrichment US, at an estimated number of 20.6 million. The number of parrots in other forms of captivity such as zoos, aquariums and shelters is unknown, but obtaining accurate numbers is not as relevant as enhancing the environment that we provide for these captive species of birds. As we discussed in previous articles, the categories of enrichment should be used to enhance the species’ behavioral, physical, social, cognitive and psychological well-being. These categories are not mutually exclusive and often overlap. They are each vital components for the health and welfare of any species of parrot in captivity. Play can be incorporated into these enrichment categories but is often overlooked.

increases their welfare and well-being. When properly planned and supervised, enrichment can be used as therapy to help parrots while they are recuperating from sickness or injury. Just like a dog or cat needs to wear a cone to keep them from licking their injury while they heal, parrots sometimes need this as well. But with “the cone of shame” on they are unable to preen themselves, which is a necessary and comforting behavior for parrots. A very effective method to help expedite a parrot’s recovery in a more comfortable and fun way is to provide enrichment. One example is providing a preening ball filled with sterilized feathers peeking out for the parrot to “groom.” This allows the parrot to engage in natural, healthy behaviors while healing.

Parrots need to play every day. They may be living in an enclosure at your house or shelter but they still have innate behavioral needs that must be met. It is crucial to the physical and emotional health of every bird. Utilizing and encouraging play increases coordination and circulation, and provides a healthy and productive energy outlet. If we want to encourage natural behaviors such as flying, flapping, foraging, climbing, chewing, tearing, tossing, walking, hiding, holding, preening, searching and singing, we can do all of this through play. Play is powerful. It influences development, motivation, emotions, physiology, communication and behavior. – Dr. Patricia McConnell

Enrichment is intended to enhance well-being so it can be a source of more than just fun. We now know that enrichment’s role in therapeutic intervention is valuable too. As the name implies, therapeutic intervention is intended to reduce the level of abnormal behavior in an animal. When we actively encourage captive parrots to increase the usage of and to have control of their environment, it

Parrot guardians (and even parrot consultants) are often so focused on fixing behavioral problems that it is easy to forget to have fun. If we were to make play a priority, we could prevent many behavioral and medical issues. As companion animal behavior consultants, we understand that motivating the humans in the home or at a shelter to implement our recommendations – to include consistent and appropriate species specific enrichment is where much of the challenge lies. We can encourage them but we need their buy-in to see it happen. There is nothing quite like seeing someone who was once resistant to the idea of providing daily enrichment for their parrot turn into someone who owns and values their role as the enricher. As an enrichment coordinator, I know that the application of daily enrichment has to be easy enough so that others, with their limited time schedules, can implement it. I know that the results of their efforts have to override their limited belief in its value. If I am going to convince a fellow zookeeper or educator to take time out of their already jam-packed daily schedule, the enrichment has to be quick and easy but also valuable to the overall well-being of the animal. Making it fun for both the parrot and the person is key. If the person is having a great time while engaged with the parrot, or while watching the parrot play, exBARKS from the Guild/November 2015

BARKS from the Guild November 2015