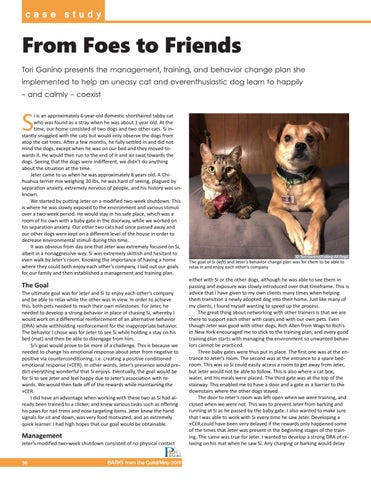 From Foes to Friends Tori Ganino presents the management, training, and behavior change plan she implemented to help an uneasy cat and overenthusiastic dog learn to happily – and calmly – coexist

i is an approximately 6-year-old domestic shorthaired tabby cat who was found as a stray when he was about 1 year old. At the time, our home consisted of two dogs and two other cats. Si instantly snuggled with the cats but would only observe the dogs from atop the cat trees. After a few months, he fully settled in and did not mind the dogs, except when he was on our bed and they moved towards it. He would then run to the end of it and air swat towards the dogs. Seeing that the dogs were indifferent, we didn’t do anything about the situation at the time. Jeter came to us when he was approximately 8 years old. A Chihuahua terrier mix weighing 30 lbs, he was hard of seeing, plagued by separation anxiety, extremely nervous of people, and his history was unknown. We started by putting Jeter on a modified two-week shutdown. This is where he was slowly exposed to the environment and various stimuli over a two-week period. He would stay in his safe place, which was a room of his own with a baby gate in the doorway, while we worked on his separation anxiety. Our other two cats had since passed away and our other dogs were kept on a different level of the house in order to decrease environmental stimuli during this time. It was obvious from day one that Jeter was extremely focused on Si, albeit in a nonaggressive way. Si was extremely skittish and hesitant to even walk by Jeter’s room. Knowing the importance of having a home where they could both enjoy each other’s company, I laid out our goals for our family and then established a management and training plan.

The Goal The ultimate goal was for Jeter and Si to enjoy each other’s company and be able to relax while the other was in view. In order to achieve this, both pets needed to reach their own milestones. For Jeter, he needed to develop a strong behavior in place of chasing Si, whereby I would work on a differential reinforcement of an alternative behavior (DRA) while withholding reinforcement for the inappropriate behavior. The behavior I chose was for Jeter to see Si while holding a stay on his bed (mat) and then be able to disengage from him. Si’s goal would prove to be more of a challenge. This is because we needed to change his emotional response about Jeter from negative to positive via counterconditioning, i.e. creating a positive conditioned emotional response (+CER). In other words, Jeter’s presence would predict everything wonderful that Si enjoys. Eventually, the goal would be for Si to see Jeter and feel happy due to Jeter’s association with rewards. We would then fade off of the rewards while maintaining the +CER. I did have an advantage when working with these two as Si had already been trained to a clicker, and knew various tasks such as offering his paws for nail trims and nose targeting items. Jeter knew the hand signals for sit and down, was very food motivated, and an extremely quick learner. I had high hopes that our goal would be obtainable.

either with Si or the other dogs, although he was able to see them in passing and exposure was slowly introduced over that timeframe. This is advice that I have given to my own clients many times when helping them transition a newly adopted dog into their home. Just like many of my clients, I found myself wanting to speed up the process. The great thing about networking with other trainers is that we are there to support each other with cases and with our own pets. Even though Jeter was good with other dogs, Rich Allen from Wags to Rich’s in New York encouraged me to stick to the training plan, and every good training plan starts with managing the environment so unwanted behaviors cannot be practiced. Three baby gates were thus put in place. The first one was at the entrance to Jeter’s room. The second was at the entrance to a spare bedroom. This was so Si could easily access a room to get away from Jeter, but Jeter would not be able to follow. This is also where a cat box, water, and his meals were placed. The third gate was at the top of the stairway. This enabled me to have a door and a gate as a barrier to the downstairs where the other dogs stayed. The door to Jeter’s room was left open when we were training, and closed when we were not. This was to prevent Jeter from barking and running at Si as he passed by the baby gate. I also wanted to make sure that I was able to work with Si every time he saw Jeter. Developing a +CER could have been very delayed if the rewards only happened some of the times that Jeter was present in the beginning stages of the training. The same was true for Jeter. I wanted to develop a strong DRA of relaxing on his mat when he saw Si. Any charging or barking would delay