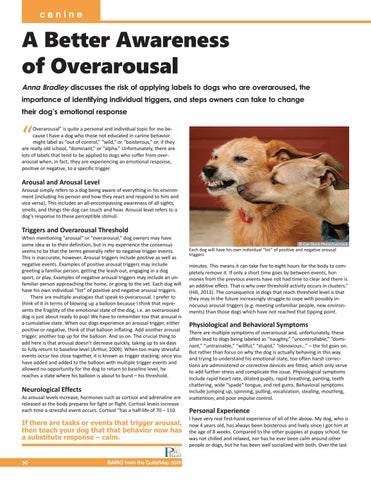 A Better Awareness of Overarousal

Anna Bradley discusses the risk of applying labels to dogs who are overaroused, the

importance of identifying individual triggers, and steps owners can take to change

Overarousal” is quite a personal and individual topic for me because I have a dog who those not educated in canine behavior might label as “out of control,” “wild,” or “boisterous,” or, if they are really old school, “dominant,” or “alpha.” Unfortunately, there are lots of labels that tend to be applied to dogs who suffer from overarousal when, in fact, they are experiencing an emotional response, positive or negative, to a specific trigger.

Arousal simply refers to a dog being aware of everything in his environment (including his person and how they react and respond to him and vice versa). This includes an all-encompassing awareness of all sights, smells, and things the dog can touch and hear. Arousal level refers to a dog’s response to these perceptible stimuli.

When mentioning “arousal” or “overarousal,” dog owners may have some idea as to their definition, but in my experience the consensus seems to be that the terms generally refer to negative trigger events. This is inaccurate, however. Arousal triggers include positive as well as negative events. Examples of positive arousal triggers may include greeting a familiar person, getting the leash out, engaging in a dog sport, or play. Examples of negative arousal triggers may include an unfamiliar person approaching the home, or going to the vet. Each dog will have his own individual “list” of positive and negative arousal triggers. There are multiple analogies that speak to overarousal. I prefer to think of it in terms of blowing up a balloon because I think that represents the fragility of the emotional state of the dog, i.e. an overaroused dog is just about ready to pop! We have to remember too that arousal is a cumulative state. When our dogs experience an arousal trigger, either positive or negative, think of that balloon inflating. Add another arousal trigger, another top up for the balloon. And so on. The crucial thing to add here is that arousal doesn’t decrease quickly, taking up to six days to fully return to baseline level (Arthur, 2009). When too many stressful events occur too close together, it is known as trigger stacking; once you have added and added to the balloon with multiple trigger events and allowed no opportunity for the dog to return to baseline level, he reaches a state where his balloon is about to burst – his threshold.

As arousal levels increase, hormones such as cortisol and adrenaline are released as the body prepares for fight or flight. Cortisol levels increase each time a stressful event occurs. Cortisol “has a half-life of 70 – 110

If there are tasks or events that trigger arousal, then teach your dog that that behavior now has a substitute response – calm. 30

minutes. This means it can take five to eight hours for the body to completely remove it. If only a short time goes by between events, hormones from the previous events have not had time to clear and there is an additive effect. That is why over threshold activity occurs in clusters.” (Hill, 2013). The consequence in dogs that reach threshold level is that they may in the future increasingly struggle to cope with possibly innocuous arousal triggers (e.g. meeting unfamiliar people, new environments) than those dogs which have not reached that tipping point.

There are multiple symptoms of overarousal and, unfortunately, these often lead to dogs being labeled as “naughty,” “uncontrollable,” “dominant,” “untrainable,” “willful,” “stupid,” “obnoxious…” – the list goes on. But rather than focus on why the dog is actually behaving in this way and trying to understand his emotional state, too often harsh corrections are administered or corrective devices are fitted, which only serve to add further stress and complicate the issue. Physiological symptoms include rapid heart rate, dilated pupils, rapid breathing, panting, teeth chattering, wide “spade” tongue, and red gums. Behavioral symptoms include jumping up, spinning, pulling, vocalization, stealing, mouthing, inattention, and poor impulse control.

I have very real first-hand experience of all of the above. My dog, who is now 4 years old, has always been boisterous and lively since I got him at the age of 8 weeks. Compared to the other puppies at puppy school, he was not chilled and relaxed, nor has he ever been calm around other people or dogs, but he has been well socialized with both. Over the last