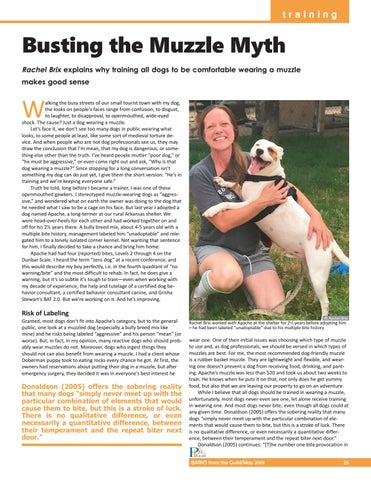 alking the busy streets of our small tourist town with my dog, the looks on people&#39;s faces range from confusion, to disgust, to laughter, to disapproval, to openmouthed, wide-eyed shock. The cause? Just a dog wearing a muzzle. Let’s face it, we don’t see too many dogs in public wearing what looks, to some people at least, like some sort of medieval torture device. And when people who are not dog professionals see us, they may draw the conclusion that I’m mean, that my dog is dangerous, or something else other than the truth. I’ve heard people mutter “poor dog,” or “he must be aggressive,” or even come right out and ask, “Why is that dog wearing a muzzle?” Since stopping for a long conversation isn’t something my dog can do just yet, I give them the short version: “He’s in training and we’re keeping everyone safe.” Truth be told, long before I became a trainer, I was one of these openmouthed gawkers. I stereotyped muzzle-wearing dogs as “aggressive,” and wondered what on earth the owner was doing to the dog that he needed what I saw to be a cage on his face. But last year I adopted a dog named Apache, a long-termer at our rural Arkansas shelter. We were head-over-heels for each other and had worked together on and off for his 2½ years there. A bully breed mix, about 4-5 years old with a multiple bite history, management labeled him “unadoptable” and relegated him to a lonely isolated corner kennel. Not wanting that sentence for him, I finally decided to take a chance and bring him home. Apache had had four (reported) bites, Levels 2 through 4 on the Dunbar Scale. I heard the term “zero dog” at a recent conference, and this would describe my boy perfectly, i.e. in the fourth quadrant of “no warning/bite” and the most difficult to rehab. In fact, he does give a warning, but it’s so subtle it’s tough to train—even when working with my decade of experience, the help and tutelage of a certified dog behavior consultant, a certified behavior consultant canine, and Grisha Stewart’s BAT 2.0. But we’re working on it. And he’s improving.

Granted, most dogs don’t fit into Apache’s category, but to the general public, one look at a muzzled dog (especially a bully breed mix like mine) and he risks being labeled “aggressive” and his person “mean” (or worse). But, in fact, in my opinion, many reactive dogs who should probably wear muzzles do not. Moreover, dogs who ingest things they should not can also benefit from wearing a muzzle. I had a client whose Doberman puppy took to eating rocks every chance he got. At first, the owners had reservations about putting their dog in a muzzle, but after emergency surgery, they decided it was in everyone’s best interest he

Donaldson (2005) offers the sobering reality that many dogs “simply never meet up with the particular combination of elements that would cause them to bite, but this is a stroke of luck. There is no qualitative difference, or even necessarily a quantitative difference, between their temperament and the repeat biter next door.”

wear one. One of their initial issues was choosing which type of muzzle to use and, as dog professionals, we should be versed in which types of muzzles are best. For me, the most recommended dog-friendly muzzle is a rubber basket muzzle. They are lightweight and flexible, and wearing one doesn’t prevent a dog from receiving food, drinking, and panting. Apache’s muzzle was less than $20 and took us about two weeks to train. He knows when he puts it on that, not only does he get yummy food, but also that we are leaving our property to go on an adventure. While I believe that all dogs should be trained in wearing a muzzle, unfortunately, most dogs never even see one, let alone receive training in wearing one. And most dogs never bite; even though all dogs could at any given time. Donaldson (2005) offers the sobering reality that many dogs “simply never meet up with the particular combination of elements that would cause them to bite, but this is a stroke of luck. There is no qualitative difference, or even necessarily a quantitative difference, between their temperament and the repeat biter next door.” Donaldson (2005) continues: “[T]he number one bite provocation in BARKS from the Guild/May 2019