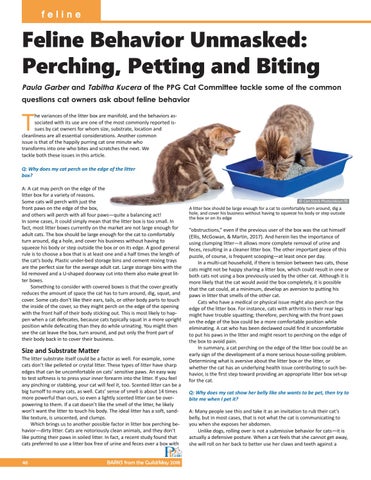 questions cat owners ask about feline behavior he variances of the litter box are manifold, and the behaviors associated with its use are one of the most commonly reported issues by cat owners for whom size, substrate, location and cleanliness are all essential considerations. Another common issue is that of the happily purring cat one minute who transforms into one who bites and scratches the next. We tackle both these issues in this article.

Q: Why does my cat perch on the edge of the litter box?

A: A cat may perch on the edge of the litter box for a variety of reasons. Some cats will perch with just the front paws on the edge of the box, and others will perch with all four paws—quite a balancing act! In some cases, it could simply mean that the litter box is too small. In fact, most litter boxes currently on the market are not large enough for adult cats. The box should be large enough for the cat to comfortably turn around, dig a hole, and cover his business without having to squeeze his body or step outside the box or on its edge. A good general rule is to choose a box that is at least one and a half times the length of the cat’s body. Plastic under-bed storage bins and cement mixing trays are the perfect size for the average adult cat. Large storage bins with the lid removed and a U-shaped doorway cut into them also make great litter boxes. Something to consider with covered boxes is that the cover greatly reduces the amount of space the cat has to turn around, dig, squat, and cover. Some cats don’t like their ears, tails, or other body parts to touch the inside of the cover, so they might perch on the edge of the opening with the front half of their body sticking out. This is most likely to happen when a cat defecates, because cats typically squat in a more upright position while defecating than they do while urinating. You might then see the cat leave the box, turn around, and put only the front part of their body back in to cover their business.

The litter substrate itself could be a factor as well. For example, some cats don’t like pelleted or crystal litter. These types of litter have sharp edges that can be uncomfortable on cats’ sensitive paws. An easy way to test softness is to press your inner forearm into the litter. If you feel any pinching or stabbing, your cat will feel it, too. Scented litter can be a big turnoff to many cats, as well. Cats’ sense of smell is about 14 times more powerful than ours, so even a lightly scented litter can be overpowering to them. If a cat doesn’t like the smell of the litter, he likely won’t want the litter to touch his body. The ideal litter has a soft, sandlike texture, is unscented, and clumps. Which brings us to another possible factor in litter box perching behavior—dirty litter. Cats are notoriously clean animals, and they don’t like putting their paws in soiled litter. In fact, a recent study found that cats preferred to use a litter box free of urine and feces over a box with 46

A litter box should be large enough for a cat to comfortably turn around, dig a hole, and cover his business without having to squeeze his body or step outside the box or on its edge

“obstructions,” even if the previous user of the box was the cat himself (Ellis, McGowan, &amp; Martin, 2017). And herein lies the importance of using clumping litter—it allows more complete removal of urine and feces, resulting in a cleaner litter box. The other important piece of this puzzle, of course, is frequent scooping—at least once per day. In a multi-cat household, if there is tension between two cats, those cats might not be happy sharing a litter box, which could result in one or both cats not using a box previously used by the other cat. Although it is more likely that the cat would avoid the box completely, it is possible that the cat could, at a minimum, develop an aversion to putting his paws in litter that smells of the other cat. Cats who have a medical or physical issue might also perch on the edge of the litter box. For instance, cats with arthritis in their rear legs might have trouble squatting; therefore, perching with the front paws on the edge of the box could be a more comfortable position while eliminating. A cat who has been declawed could find it uncomfortable to put his paws in the litter and might resort to perching on the edge of the box to avoid pain. In summary, a cat perching on the edge of the litter box could be an early sign of the development of a more serious house-soiling problem. Determining what is aversive about the litter box or the litter, or whether the cat has an underlying health issue contributing to such behavior, is the first step toward providing an appropriate litter box set-up for the cat.

Q: Why does my cat show her belly like she wants to be pet, then try to bite me when I pet it?

A: Many people see this and take it as an invitation to rub their cat’s belly, but in most cases, that is not what the cat is communicating to you when she exposes her abdomen. Unlike dogs, rolling over is not a submissive behavior for cats—it is actually a defensive posture. When a cat feels that she cannot get away, she will roll on her back to better use her claws and teeth against a