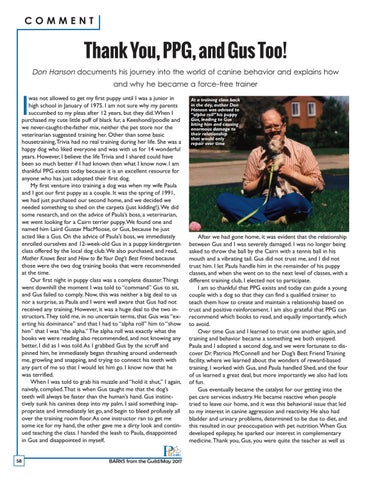 Thank You, PPG, and Gus Too!

was not allowed to get my first puppy until I was a junior in high school in January of 1975. I am not sure why my parents succumbed to my pleas after 12 years, but they did. When I purchased my cute little puff of black fur, a Keeshond/poodle and we never-caught-the-father mix, neither the pet store nor the veterinarian suggested training her. Other than some basic housetraining, Trivia had no real training during her life. She was a happy dog who liked everyone and was with us for 14 wonderful years. However, I believe the life Trivia and I shared could have been so much better if I had known then what I know now. I am thankful PPG exists today because it is an excellent resource for anyone who has just adopted their first dog. My first venture into training a dog was when my wife Paula and I got our first puppy as a couple. It was the spring of 1991, we had just purchased our second home, and we decided we needed something to shed on the carpets (just kidding!). We did some research, and on the advice of Paula’s boss, a veterinarian, we went looking for a Cairn terrier puppy. We found one and named him Laird Gustav MacMoose, or Gus, because he just acted like a Gus. On the advice of Paula’s boss, we immediately enrolled ourselves and 12-week-old Gus in a puppy kindergarten class offered by the local dog club. We also purchased, and read, Mother Knows Best and How to Be Your Dog’s Best Friend because those were the two dog training books that were recommended at the time. Our first night in puppy class was a complete disaster. Things went downhill the moment I was told to “command” Gus to sit, and Gus failed to comply. Now, this was neither a big deal to us nor a surprise, as Paula and I were well aware that Gus had not received any training. However, it was a huge deal to the two instructors. They told me, in no uncertain terms, that Gus was “exerting his dominance” and that I had to “alpha roll” him to “show him” that I was “the alpha.” The alpha roll was exactly what the books we were reading also recommended, and not knowing any better, I did as I was told. As I grabbed Gus by the scruff and pinned him, he immediately began thrashing around underneath me, growling and snapping, and trying to connect his teeth with any part of me so that I would let him go. I know now that he was terrified. When I was told to grab his muzzle and “hold it shut,” I again, naively, complied. That is when Gus taught me that the dog’s teeth will always be faster than the human’s hand. Gus instinctively sunk his canines deep into my palm. I said something inappropriate and immediately let go, and begin to bleed profusely all over the training room floor. As one instructor ran to get me some ice for my hand, the other gave me a dirty look and continued teaching the class. I handed the leash to Paula, disappointed in Gus and disappointed in myself. 58

At a training class back in the day, author Don Hanson was advised to “alpha roll” his puppy Gus, leading to Gus biting him and causing enormous damage to their relationship that would only repair over time

After we had gone home, it was evident that the relationship between Gus and I was severely damaged. I was no longer being asked to throw the ball by the Cairn with a tennis ball in his mouth and a vibrating tail. Gus did not trust me, and I did not trust him. I let Paula handle him in the remainder of his puppy classes, and when she went on to the next level of classes, with a different training club, I elected not to participate. I am so thankful that PPG exists and today can guide a young couple with a dog so that they can find a qualified trainer to teach them how to create and maintain a relationship based on trust and positive reinforcement. I am also grateful that PPG can recommend which books to read, and equally importantly, which to avoid. Over time Gus and I learned to trust one another again, and training and behavior became a something we both enjoyed. Paula and I adopted a second dog, and we were fortunate to discover Dr. Patricia McConnell and her Dog’s Best Friend Training facility, where we learned about the wonders of reward-based training. I worked with Gus, and Paula handled Shed, and the four of us learned a great deal, but more importantly we also had lots of fun. Gus eventually became the catalyst for our getting into the pet care services industry. He became reactive when people tried to leave our home, and it was this behavioral issue that led to my interest in canine aggression and reactivity. He also had bladder and urinary problems, determined to be due to diet, and this resulted in our preoccupation with pet nutrition. When Gus developed epilepsy, he sparked our interest in complementary medicine. Thank you, Gus, you were quite the teacher as well as