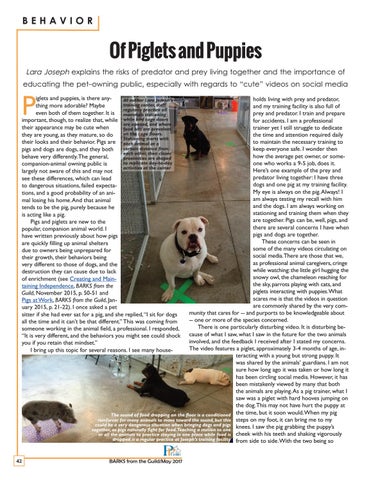 Of Piglets and Puppies

educating the pet-owning public, especially with regards to “cute” videos on social media

iglets and puppies, is there anyAt author Lara Joseph’s training center, staff thing more adorable? Maybe regularly practice all even both of them together. It is mammals stationing important, though, to realize that, while while bird cage doors are opened, and where their appearance may be cute when food bits are prevalent on the cage floors. they are young, as they mature, so do Stationing starts with their looks and their behavior. Pigs are each animal at a certain distance from pigs and dogs are dogs, and they both each other, then closer behave very differently. The general, proximities are shaped to replicate day-to-day companion-animal owning public is activities at the center largely not aware of this and may not see these differences, which can lead to dangerous situations, failed expectations, and a good probability of an animal losing his home. And that animal tends to be the pig, purely because he is acting like a pig. Pigs and piglets are new to the popular, companion animal world. I have written previously about how pigs are quickly filling up animal shelters due to owners being unprepared for their growth, their behaviors being very different to those of dogs, and the destruction they can cause due to lack of enrichment (see Creating and Maintaining Independence, BARKS from the Guild, November 2015, p. 50-51 and Pigs at Work, BARKS from the Guild, January 2015, p. 21-22). I once asked a pet sitter if she had ever sat for a pig, and she replied, “I sit for dogs all the time and it can’t be that different.” This was coming from someone working in the animal field, a professional. I responded, “It is very different, and the behaviors you might see could shock you if you retain that mindset.” I bring up this topic for several reasons. I see many house-

holds living with prey and predator, and my training facility is also full of prey and predator. I train and prepare for accidents. I am a professional trainer yet I still struggle to dedicate the time and attention required daily to maintain the necessary training to keep everyone safe. I wonder then how the average pet owner, or someone who works a 9-5 job, does it. Here’s one example of the prey and predator living together: I have three dogs and one pig at my training facility. My eye is always on the pig. Always! I am always testing my recall with him and the dogs. I am always working on stationing and training them when they are together. Pigs can be, well, pigs, and there are several concerns I have when pigs and dogs are together. These concerns can be seen in some of the many videos circulating on social media. There are those that we, as professional animal caregivers, cringe while watching: the little girl hugging the snowy owl, the chameleon reaching for the sky, parrots playing with cats, and piglets interacting with puppies. What scares me is that the videos in question are commonly shared by the very community that cares for -- and purports to be knowledgeable about -- one or more of the species concerned. There is one particularly disturbing video. It is disturbing because of what I saw, what I saw in the future for the two animals involved, and the feedback I received after I stated my concerns. The video features a piglet, approximately 3-4 months of age, interacting with a young but strong puppy. It was shared by the animals’ guardians. I am not sure how long ago it was taken or how long it has been circling social media. However, it has been mistakenly viewed by many that both the animals are playing. As a pig trainer, what I saw was a piglet with hard hooves jumping on the dog. This may not have hurt the puppy at The sound of food dropping on the floor is a conditioned the time, but it soon would. When my pig reinforcer for many animals to move toward the sound, but this steps on my foot, it can bring me to my could be a very dangerous situation when bringing dogs and pigs knees. I saw the pig grabbing the puppy’s together, as pigs naturally fight for food.Teaching a station to one or all the animals to practice staying in one place while food is cheek with his teeth and shaking vigorously dropped is a regular practice at Joseph’s training facility from side to side. With the two being so BARKS from the Guild/May 2017