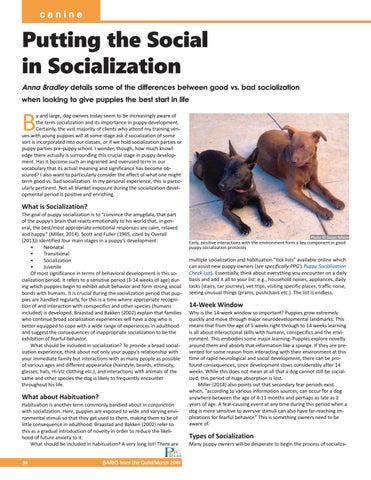 Putting the Social in Socialization

Anna Bradley details some of the differences between good vs. bad socialization

when looking to give puppies the best start in life y and large, dog owners today seem to be increasingly aware of the term socialization and its importance in puppy development. Certainly, the vast majority of clients who attend my training venues with young puppies will at some stage ask if socialization of some sort is incorporated into our classes, or if we hold socialization parties or puppy parties pre-puppy school. I wonder, though, how much knowledge there actually is surrounding this crucial stage in puppy development. Has it become such an ingrained and overused term in our vocabulary that its actual meaning and significance has become obscured? I also want to particularly consider the effect of what one might term good vs. bad socialization. In my personal experience, this is particularly pertinent. Not all blanket exposure during the socialization developmental period is positive and enriching.

The goal of puppy socialization is to “convince the amygdala, that part of the puppy’s brain that reacts emotionally to his world that, in general, the best/most appropriate emotional responses are calm, relaxed and happy.” (Miller, 2014). Scott and Fuller (1965, cited by Overall (2013)) identified four main stages in a puppy’s development: • Neonatal • Transitional • Socialization • Juvenile Of most significance in terms of behavioral development is this socialization period. It refers to a sensitive period (3-14 weeks of age) during which puppies begin to exhibit adult behavior and form strong social bonds with humans. It is crucial during the socialization period that puppies are handled regularly, for this is a time where appropriate recognition of and interaction with conspecifics and other species (humans included) is developed. Braastad and Bakken (2002) explain that families who continue broad socialization experiences will have a dog who is better equipped to cope with a wide range of experiences in adulthood and suggest the consequences of inappropriate socialization to be the exhibition of fearful behavior. What should be included in socialization? To provide a broad socialization experience, think about not only your puppy’s relationship with your immediate family but interactions with as many people as possible of various ages and different appearance (hairstyle, beards, ethnicity, glasses, hats, Hi-Viz clothing etc.), and interactions with animals of the same and other species the dog is likely to frequently encounter throughout his life.

Habituation is another term commonly bandied about in conjunction with socialization. Here, puppies are exposed to wide and varying environmental stimuli so that they get used to them, making them to be of little consequence in adulthood. Braastad and Bakken (2002) refer to this as a gradual introduction of novelty in order to reduce the likelihood of future anxiety to it. What should be included in habituation? A very long list! There are 34

Why is the 14-week window so important? Puppies grow extremely quickly and move through major neurodevelopmental landmarks. This means that from the age of 5 weeks right through to 14 weeks learning is all about interactional skills with humans, conspecifics and the environment. This embodies some major learning. Puppies explore novelty around them and absorb that information like a sponge. If they are prevented for some reason from interacting with their environment at this time of rapid neurological and social development, there can be profound consequences, since development slows considerably after 14 weeks. While this does not mean at all that a dog cannot still be socialized, this period of huge absorption is lost. Miller (2014) also points out that secondary fear periods exist which, “according to various information sources, can occur for a dog anywhere between the age of 4-11 months and perhaps as late as 2 years of age. A fear-causing event at any time during this period when a dog is more sensitive to aversive stimuli can also have far-reaching implications for fearful behavior.” This is something owners need to be aware of.