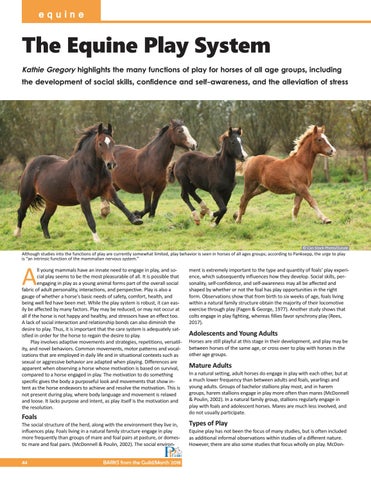 Kathie Gregory highlights the many functions of play for horses of all age groups, including

the development of social skills, confidence and self-awareness, and the alleviation of stress

Although studies into the functions of play are currently somewhat limited, play behavior is seen in horses of all ages groups; according to Panksepp, the urge to play is “an intrinsic function of the mammalian nervous system.”

ll young mammals have an innate need to engage in play, and social play seems to be the most pleasurable of all. It is possible that engaging in play as a young animal forms part of the overall social fabric of adult personality, interactions, and perspective. Play is also a gauge of whether a horse&#39;s basic needs of safety, comfort, health, and being well fed have been met. While the play system is robust, it can easily be affected by many factors. Play may be reduced, or may not occur at all if the horse is not happy and healthy, and stressors have an effect too. A lack of social interaction and relationship bonds can also diminish the desire to play. Thus, it is important that the care system is adequately satisfied in order for the horse to regain the desire to play. Play involves adaptive movements and strategies, repetitions, versatility, and novel behaviors. Common movements, motor patterns and vocalizations that are employed in daily life and in situational contexts such as sexual or aggressive behavior are adapted when playing. Differences are apparent when observing a horse whose motivation is based on survival, compared to a horse engaged in play. The motivation to do something specific gives the body a purposeful look and movements that show intent as the horse endeavors to achieve and resolve the motivation. This is not present during play, where body language and movement is relaxed and loose. It lacks purpose and intent, as play itself is the motivation and the resolution.

ment is extremely important to the type and quantity of foals’ play experience, which subsequently influences how they develop. Social skills, personality, self-confidence, and self-awareness may all be affected and shaped by whether or not the foal has play opportunities in the right form. Observations show that from birth to six weeks of age, foals living within a natural family structure obtain the majority of their locomotive exercise through play (Fagen &amp; George, 1977). Another study shows that colts engage in play fighting, whereas fillies favor synchrony play (Rees, 2017).

Horses are still playful at this stage in their development, and play may be between horses of the same age, or cross over to play with horses in the other age groups.

In a natural setting, adult horses do engage in play with each other, but at a much lower frequency than between adults and foals, yearlings and young adults. Groups of bachelor stallions play most, and in harem groups, harem stallions engage in play more often than mares (McDonnell &amp; Poulin, 2002). In a natural family group, stallions regularly engage in play with foals and adolescent horses. Mares are much less involved, and do not usually participate.

Equine play has not been the focus of many studies, but is often included as additional informal observations within studies of a different nature. However, there are also some studies that focus wholly on play. McDon-