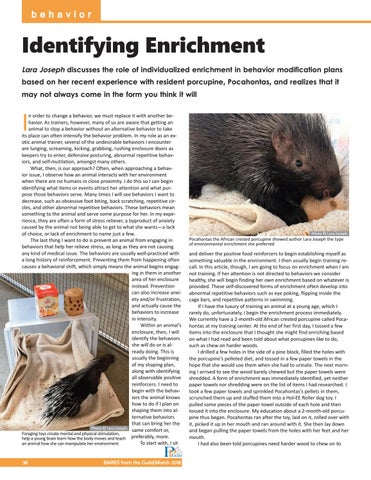 based on her recent experience with resident porcupine, Pocahontas, and realizes that it

may not always come in the form you think it will n order to change a behavior, we must replace it with another behavior. As trainers, however, many of us are aware that getting an animal to stop a behavior without an alternative behavior to take its place can often intensify the behavior problem. In my role as an exotic animal trainer, several of the undesirable behaviors I encounter are lunging, screaming, kicking, grabbing, rushing enclosure doors as keepers try to enter, defensive posturing, abnormal repetitive behaviors, and self-mutilation, amongst many others. What, then, is our approach? Often, when approaching a behavior issue, I observe how an animal interacts with her environment when there are no humans in close proximity. I do this so I can begin identifying what items or events attract her attention and what purpose those behaviors serve. Many times I will see behaviors I want to decrease, such as obsessive foot biting, back scratching, repetitive circles, and other abnormal repetitive behaviors. These behaviors mean something to the animal and serve some purpose for her. In my experience, they are often a form of stress reliever, a byproduct of anxiety caused by the animal not being able to get to what she wants—a lack of choice, or lack of enrichment to name just a few. The last thing I want to do is prevent an animal from engaging in behaviors that help her relieve stress, as long as they are not causing any kind of medical issue. The behaviors are usually well-practiced with a long history of reinforcement. Preventing them from happening often causes a behavioral shift, which simply means the animal begins engaging in them in another area of her enclosure instead. Prevention can also increase anxiety and/or frustration, and actually cause the behaviors to increase in intensity. Within an animal’s enclosure, then, I will identify the behaviors she will do or is already doing. This is usually the beginning of my shaping plan, along with identifying all observable positive reinforcers. I need to begin with the behaviors the animal knows how to do if I plan on shaping them into alternative behaviors that can bring her the Photo © Lara Joseph same comfort or, Foraging toys create mental and physical stimulation, help a young brain learn how the body moves and teach preferably, more. To start with, I sit an animal how she can manipulate her environment 38

and deliver the positive food reinforcers to begin establishing myself as something valuable in the environment. I then usually begin training recall. In this article, though, I am going to focus on enrichment when I am not training. If her attention is not directed to behaviors we consider healthy, she will begin finding her own enrichment based on whatever is provided. These self-discovered forms of enrichment often develop into abnormal repetitive behaviors such as eye poking, flipping inside the cage bars, and repetitive patterns in swimming. If I have the luxury of training an animal at a young age, which I rarely do, unfortunately, I begin the enrichment process immediately. We currently have a 2-month-old African crested porcupine called Pocahontas at my training center. At the end of her first day, I tossed a few items into the enclosure that I thought she might find enriching based on what I had read and been told about what porcupines like to do, such as chew on harder woods. I drilled a few holes in the side of a pine block, filled the holes with the porcupine’s pelleted diet, and tossed in a few paper towels in the hope that she would use them when she had to urinate. The next morning I arrived to see the wood barely chewed but the paper towels were shredded. A form of enrichment was immediately identified, yet neither paper towels nor shredding were on the list of items I had researched. I took a few paper towels and sprinkled Pocahontas’s pellets in them, scrunched them up and stuffed them into a Hol-EE Roller dog toy. I pulled some pieces of the paper towel outside of each hole and then tossed it into the enclosure. My education about a 2-month-old porcupine thus began. Pocahontas ran after the toy, laid on it, rolled over with it, picked it up in her mouth and ran around with it. She then lay down and began pulling the paper towels from the holes with her feet and her mouth. I had also been told porcupines need harder wood to chew on to