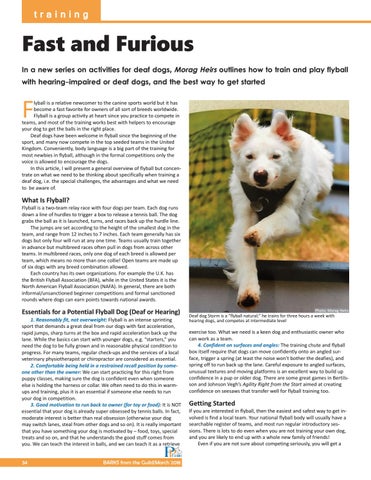 In a new series on activities for deaf dogs, Morag Heirs outlines how to train and play flyball

with hearing-impaired or deaf dogs, and the best way to get started lyball is a relative newcomer to the canine sports world but it has become a fast favorite for owners of all sort of breeds worldwide. Flyball is a group activity at heart since you practice to compete in teams, and most of the training works best with helpers to encourage your dog to get the balls in the right place. Deaf dogs have been welcome in flyball since the beginning of the sport, and many now compete in the top seeded teams in the United Kingdom. Conveniently, body language is a big part of the training for most newbies in flyball, although in the formal competitions only the voice is allowed to encourage the dogs. In this article, I will present a general overview of flyball but concentrate on what we need to be thinking about specifically when training a deaf dog, i.e. the special challenges, the advantages and what we need to be aware of.

Flyball is a two-team relay race with four dogs per team. Each dog runs down a line of hurdles to trigger a box to release a tennis ball. The dog grabs the ball as it is launched, turns, and races back up the hurdle line. The jumps are set according to the height of the smallest dog in the team, and range from 12 inches to 7 inches. Each team generally has six dogs but only four will run at any one time. Teams usually train together in advance but multibreed races often pull in dogs from across other teams. In multibreed races, only one dog of each breed is allowed per team, which means no more than one collie! Open teams are made up of six dogs with any breed combination allowed. Each country has its own organizations. For example the U.K. has the British Flyball Association (BFA), while in the United States it is the North American Flyball Association (NAFA). In general, there are both informal/unsanctioned beginner competitions and formal sanctioned rounds where dogs can earn points towards national awards.

Essentials for a Potential Flyball Dog (Deaf or Hearing)

1. Reasonably fit, not overweight: Flyball is an intense sprinting sport that demands a great deal from our dogs with fast acceleration, rapid jumps, sharp turns at the box and rapid acceleration back up the lane. While the basics can start with younger dogs, e.g. “starters,” you need the dog to be fully grown and in reasonable physical condition to progress. For many teams, regular check-ups and the services of a local veterinary physiotherapist or chiropractor are considered as essential. 2. Comfortable being held in a restrained recall position by someone other than the owner: We can start practicing for this right from puppy classes, making sure the dog is confident even when someone else is holding the harness or collar. We often need to do this in warmups and training, plus it is an essential if someone else needs to run your dog in competition. 3. Good motivation to run back to owner (for toy or food): It is NOT essential that your dog is already super obsessed by tennis balls. In fact, moderate interest is better than real obsession (otherwise your dog may switch lanes, steal from other dogs and so on). It is really important that you have something your dog is motivated by – food, toys, special treats and so on, and that he understands the good stuff comes from you. We can teach the interest in balls, and we can teach it as a retrieve 34

Deaf dog Storm is a “flyball natural;” he trains for three hours a week with hearing dogs, and competes at intermediate level

exercise too. What we need is a keen dog and enthusiastic owner who can work as a team. 4. Confident on surfaces and angles: The training chute and flyball box itself require that dogs can move confidently onto an angled surface, trigger a spring (at least the noise won’t bother the deafies), and spring off to run back up the lane. Careful exposure to angled surfaces, unusual textures and moving platforms is an excellent way to build up confidence in a pup or older dog. There are some great games in Bertilsson and Johnson Vegh’s Agility Right from the Start aimed at creating confidence on seesaws that transfer well for flyball training too.

If you are interested in flyball, then the easiest and safest way to get involved is find a local team. Your national flyball body will usually have a searchable register of teams, and most run regular introductory sessions. There is lots to do even when you are not training your own dog, and you are likely to end up with a whole new family of friends! Even if you are not sure about competing seriously, you will get a