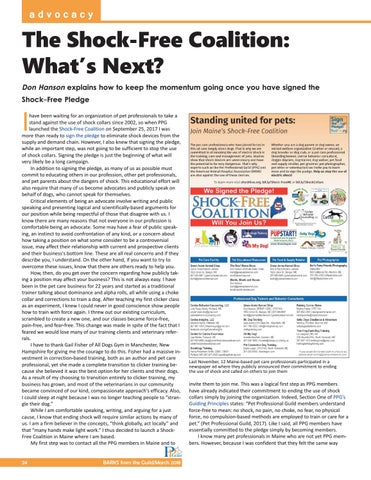 The Shock-Free Coalition: What’s Next?

have been waiting for an organization of pet professionals to take a stand against the use of shock collars since 2002, so when PPG launched the Shock-Free Coalition on September 25, 2017 I was more than ready to sign the pledge to eliminate shock devices from the supply and demand chain. However, I also knew that signing the pledge, while an important step, was not going to be sufficient to stop the use of shock collars. Signing the pledge is just the beginning of what will very likely be a long campaign. In addition to signing the pledge, as many of us as possible must commit to educating others in our profession, other pet professionals, and pet parents about the dangers of shock. This educational effort will also require that many of us become advocates and publicly speak on behalf of dogs, who cannot speak for themselves. Critical elements of being an advocate involve writing and public speaking and presenting logical and scientifically-based arguments for our position while being respectful of those that disagree with us. I know there are many reasons that not everyone in our profession is comfortable being an advocate. Some may have a fear of public speaking, an instinct to avoid confrontation of any kind, or a concern about how taking a position on what some consider to be a controversial issue, may affect their relationship with current and prospective clients and their business&#39;s bottom line. These are all real concerns and if they describe you, I understand. On the other hand, if you want to try to overcome these issues, know that there are others ready to help you. How, then, do you get over the concern regarding how publicly taking a position may affect your business? This is not always easy. I have been in the pet care business for 22 years and started as a traditional trainer talking about dominance and alpha rolls, all while using a choke collar and corrections to train a dog. After teaching my first clicker class as an experiment, I knew I could never in good conscience show people how to train with force again. I threw out our existing curriculum, scrambled to create a new one, and our classes became force-free, pain-free, and fear-free. This change was made in spite of the fact that I feared we would lose many of our training clients and veterinary referrals. I have to thank Gail Fisher of All Dogs Gym in Manchester, New Hampshire for giving me the courage to do this. Fisher had a massive investment in correction-based training, both as an author and pet care professional, yet she made a complete transition to clicker training because she believed it was the best option for her clients and their dogs. As a result of my choosing to transition entirely to clicker training, my business has grown, and most of the veterinarians in our community became convinced of our kind, compassionate approach’s efficacy. Also, I could sleep at night because I was no longer teaching people to “strangle their dog.” While I am comfortable speaking, writing, and arguing for a just cause, I know that ending shock will require similar actions by many of us. I am a firm believer in the concepts, “think globally, act locally” and that “many hands make light work.” I thus decided to launch a ShockFree Coalition in Maine where I am based. My first step was to contact all the PPG members in Maine and to 24

Last November, 12 Maine-based pet care professionals participated in a newspaper ad where they publicly announced their commitment to ending the use of shock and called on others to join them

invite them to join me. This was a logical first step as PPG members have already indicated their commitment to ending the use of shock collars simply by joining the organization. Indeed, Section One of PPG’s Guiding Principles states: “Pet Professional Guild members understand force-free to mean: no shock, no pain, no choke, no fear, no physical force, no compulsion-based methods are employed to train or care for a pet.” (Pet Professional Guild, 2017). Like I said, all PPG members have essentially committed to the pledge simply by becoming members. I know many pet professionals in Maine who are not yet PPG members. However, because I was confident that they felt the same way