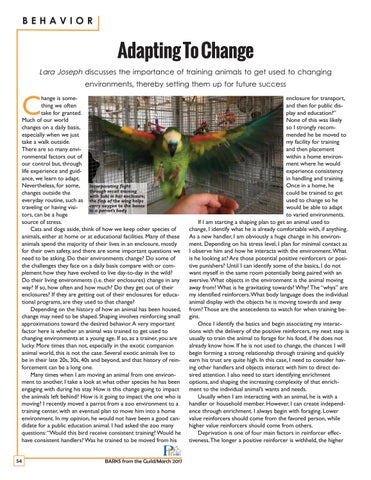 environments, thereby setting them up for future success

hange is something we often take for granted. Much of our world changes on a daily basis, especially when we just take a walk outside. There are so many environmental factors out of our control but, through life experience and guidance, we learn to adapt. Nevertheless, for some, Incorporating flight through recall training changes outside the with Suki in her enclosure; everyday routine, such as the flap of the wing helps carry oxygen to the bones traveling or having visiin a parrot’s body tors, can be a huge source of stress. Cats and dogs aside, think of how we keep other species of animals, either at home or at educational facilities. Many of these animals spend the majority of their lives in an enclosure, mostly for their own safety, and there are some important questions we need to be asking. Do their environments change? Do some of the challenges they face on a daily basis compare with or complement how they have evolved to live day-to-day in the wild? Do their living environments (i.e. their enclosures) change in any way? If so, how often and how much? Do they get out of their enclosures? If they are getting out of their enclosures for educational programs, are they used to that change? Depending on the history of how an animal has been housed, change may need to be shaped. Shaping involves reinforcing small approximations toward the desired behavior. A very important factor here is whether an animal was trained to get used to changing environments at a young age. If so, as a trainer, you are lucky. More times than not, especially in the exotic companion animal world, this is not the case. Several exotic animals live to be in their late 20s, 30s, 40s and beyond, and that history of reinforcement can be a long one. Many times when I am moving an animal from one environment to another, I take a look at what other species he has been engaging with during his stay. How is this change going to impact the animals left behind? How is it going to impact the one who is moving? I recently moved a parrot from a zoo environment to a training center, with an eventual plan to move him into a home environment. In my opinion, he would not have been a good candidate for a public education animal. I had asked the zoo many questions: “Would this bird receive consistent training? Would he have consistent handlers? Was he trained to be moved from his 54

enclosure for transport, and then for public display and education?” None of this was likely so I strongly recommended he be moved to my facility for training and then placement within a home environment where he would experience consistency in handling and training. Once in a home, he could be trained to get used to change so he would be able to adapt to varied environments. If I am starting a shaping plan to get an animal used to change, I identify what he is already comfortable with, if anything. As a new handler, I am obviously a huge change in his environment. Depending on his stress level, I plan for minimal contact as I observe him and how he interacts with the environment. What is he looking at? Are those potential positive reinforcers or positive punishers? Until I can identify some of the basics, I do not want myself in the same room potentially being paired with an aversive. What objects in the environment is the animal moving away from? What is he gravitating towards? Why? The “whys” are my identified reinforcers. What body language does the individual animal display with the objects he is moving towards and away from? Those are the antecedents to watch for when training begins. Once I identify the basics and begin associating my interactions with the delivery of the positive reinforcers, my next step is usually to train the animal to forage for his food, if he does not already know how. If he is not used to change, the chances I will begin forming a strong relationship through training and quickly earn his trust are quite high. In this case, I need to consider having other handlers and objects interact with him to direct desired attention. I also need to start identifying enrichment options, and shaping the increasing complexity of that enrichment to the individual animal’s wants and needs. Usually when I am interacting with an animal, he is with a handler or household member. However, I can create independence through enrichment. I always begin with foraging. Lower value reinforcers should come from the favored person, while higher value reinforcers should come from others. Deprivation is one of four main factors in reinforcer effectiveness. The longer a positive reinforcer is withheld, the higher