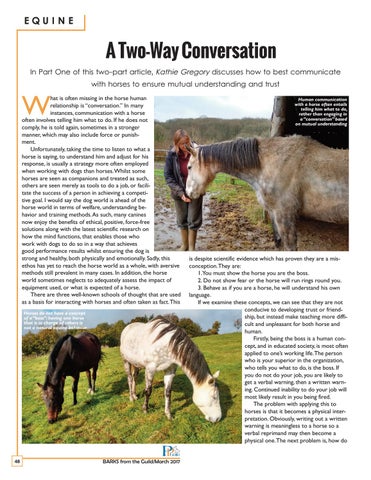 In Part One of this two-part article, Kathie Gregory discusses how to best communicate

with horses to ensure mutual understanding and trust

hat is often missing in the horse human relationship is “conversation.” In many instances, communication with a horse often involves telling him what to do. If he does not comply, he is told again, sometimes in a stronger manner, which may also include force or punishment. Unfortunately, taking the time to listen to what a horse is saying, to understand him and adjust for his response, is usually a strategy more often employed when working with dogs than horses. Whilst some horses are seen as companions and treated as such, others are seen merely as tools to do a job, or facilitate the success of a person in achieving a competitive goal. I would say the dog world is ahead of the horse world in terms of welfare, understanding behavior and training methods. As such, many canines now enjoy the benefits of ethical, positive, force-free solutions along with the latest scientific research on how the mind functions, that enables those who work with dogs to do so in a way that achieves good performance results whilst ensuring the dog is strong and healthy, both physically and emotionally. Sadly, this ethos has yet to reach the horse world as a whole, with aversive methods still prevalent in many cases. In addition, the horse world sometimes neglects to adequately assess the impact of equipment used, or what is expected of a horse. There are three well-known schools of thought that are used as a basis for interacting with horses and often taken as fact. This Horses do not have a concept of a “boss”: having one horse that is in charge of others is not a natural equine behavior

Human communication with a horse often entails telling him what to do, rather than engaging in a “conversation” based on mutual understanding

is despite scientific evidence which has proven they are a misconception. They are: 1.You must show the horse you are the boss. 2. Do not show fear or the horse will run rings round you. 3. Behave as if you are a horse, he will understand his own language. If we examine these concepts, we can see that they are not conducive to developing trust or friendship, but instead make teaching more difficult and unpleasant for both horse and human. Firstly, being the boss is a human concept, and in educated society, is most often applied to one’s working life. The person who is your superior in the organization, who tells you what to do, is the boss. If you do not do your job, you are likely to get a verbal warning, then a written warning. Continued inability to do your job will most likely result in you being fired. The problem with applying this to horses is that it becomes a physical interpretation. Obviously, writing out a written warning is meaningless to a horse so a verbal reprimand may then become a physical one. The next problem is, how do