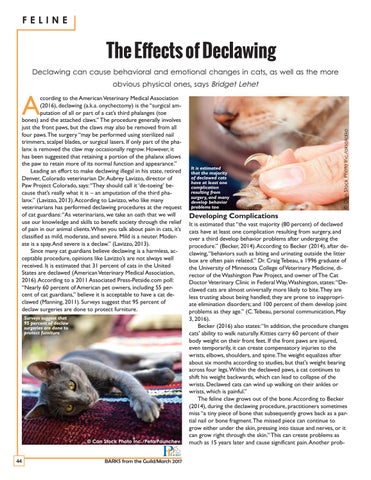 The Effects of Declawing

Declawing can cause behavioral and emotional changes in cats, as well as the more

ccording to the American Veterinary Medical Association (2016), declawing (a.k.a. onychectomy) is the “surgical amputation of all or part of a cat’s third phalanges (toe bones) and the attached claws.” The procedure generally involves just the front paws, but the claws may also be removed from all four paws. The surgery “may be performed using sterilized nail trimmers, scalpel blades, or surgical lasers. If only part of the phalanx is removed the claw may occasionally regrow. However, it has been suggested that retaining a portion of the phalanx allows the paw to retain more of its normal function and appearance.” Leading an effort to make declawing illegal in his state, retired Denver, Colorado veterinarian Dr. Aubrey Lavizzo, director of Paw Project Colorado, says: “They should call it ‘de-toeing’ because that’s really what it is – an amputation of the third phalanx.” (Lavizzo, 2013). According to Lavizzo, who like many veterinarians has performed declawing procedures at the request of cat guardians: “As veterinarians, we take an oath that we will use our knowledge and skills to benefit society through the relief of pain in our animal clients. When you talk about pain in cats, it’s classified as mild, moderate, and severe. Mild is a neuter. Moderate is a spay. And severe is a declaw.” (Lavizzo, 2013). Since many cat guardians believe declawing is a harmless, acceptable procedure, opinions like Lavizzo’s are not always well received. It is estimated that 31 percent of cats in the United States are declawed (American Veterinary Medical Association, 2016). According to a 2011 Associated Press-Petside.com poll: “Nearly 60 percent of American pet owners, including 55 percent of cat guardians,” believe it is acceptable to have a cat declawed (Manning, 2011). Surveys suggest that 95 percent of declaw surgeries are done to protect furniture. Surveys suggest that 95 percent of declaw surgeries are done to protect furniture

It is estimated that the majority of declawed cats have at least one complication resulting from surgery, and many develop behavior problems too

It is estimated that “the vast majority (80 percent) of declawed cats have at least one complication resulting from surgery, and over a third develop behavior problems after undergoing the procedure.” (Becker, 2014). According to Becker (2014), after declawing, “behaviors such as biting and urinating outside the litter box are often pain related.” Dr. Craig Tebeau, a 1996 graduate of the University of Minnesota College of Veterinary Medicine, director of the Washington Paw Project, and owner of The Cat Doctor Veterinary Clinic in Federal Way, Washington, states: “Declawed cats are almost universally more likely to bite. They are less trusting about being handled; they are prone to inappropriate elimination disorders; and 100 percent of them develop joint problems as they age.” (C. Tebeau, personal communication, May 3, 2016). Becker (2016) also states: “In addition, the procedure changes cats&#39; ability to walk naturally. Kitties carry 60 percent of their body weight on their front feet. If the front paws are injured, even temporarily, it can create compensatory injuries to the wrists, elbows, shoulders, and spine. The weight equalizes after about six months according to studies, but that&#39;s weight bearing across four legs. Within the declawed paws, a cat continues to shift his weight backwards, which can lead to collapse of the wrists. Declawed cats can wind up walking on their ankles or wrists, which is painful.” The feline claw grows out of the bone. According to Becker (2014), during the declawing procedure, practitioners sometimes miss “a tiny piece of bone that subsequently grows back as a partial nail or bone fragment. The missed piece can continue to grow either under the skin, pressing into tissue and nerves, or it can grow right through the skin.” This can create problems as much as 15 years later and cause significant pain. Another prob-