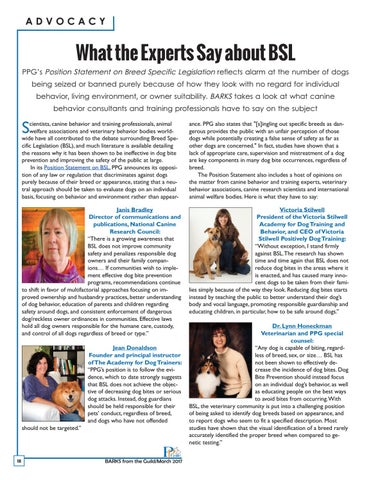 What the Experts Say about BSL

behavior, living environment, or owner suitability. BARKS takes a look at what canine behavior consultants and training professionals have to say on the subject

cientists, canine behavior and training professionals, animal welfare associations and veterinary behavior bodies worldwide have all contributed to the debate surrounding Breed Specific Legislation (BSL), and much literature is available detailing the reasons why it has been shown to be ineffective in dog bite prevention and improving the safety of the public at large. In its Position Statement on BSL, PPG announces its opposition of any law or regulation that discriminates against dogs purely because of their breed or appearance, stating that a neutral approach should be taken to evaluate dogs on an individual basis, focusing on behavior and environment rather than appear-

ance. PPG also states that &quot;[s]ingling out specific breeds as dangerous provides the public with an unfair perception of those dogs while potentially creating a false sense of safety as far as other dogs are concerned.&quot; In fact, studies have shown that a lack of appropriate care, supervision and mistreatment of a dog are key components in many dog bite occurrences, regardless of breed. The Position Statement also includes a host of opinions on the matter from canine behavior and training experts, veterinary behavior associations, canine research scientists and international animal welfare bodies. Here is what they have to say:

Janis Bradley Director of communications and publications, National Canine Research Council: “There is a growing awareness that BSL does not improve community safety and penalizes responsible dog owners and their family companions… If communities wish to implement effective dog bite prevention programs, recommendations continue to shift in favor of multifactorial approaches focusing on improved ownership and husbandry practices, better understanding of dog behavior, education of parents and children regarding safety around dogs, and consistent enforcement of dangerous dog/reckless owner ordinances in communities. Effective laws hold all dog owners responsible for the humane care, custody, and control of all dogs regardless of breed or type.”

Victoria Stilwell President of the Victoria Stilwell Academy for Dog Training and Behavior, and CEO of Victoria Stilwell Positively Dog Training: “Without exception, I stand firmly against BSL. The research has shown time and time again that BSL does not reduce dog bites in the areas where it is enacted, and has caused many innocent dogs to be taken from their families simply because of the way they look. Reducing dog bites starts instead by teaching the public to better understand their dog’s body and vocal language, promoting responsible guardianship and educating children, in particular, how to be safe around dogs.”

should not be targeted.”

Jean Donaldson Founder and principal instructor of The Academy for Dog Trainers: “PPG’s position is to follow the evidence, which to date strongly suggests that BSL does not achieve the objective of decreasing dog bites or serious dog attacks. Instead, dog guardians should be held responsible for their pets’ conduct, regardless of breed, and dogs who have not offended

Dr. Lynn Honeckman Veterinarian and PPG special counsel: “Any dog is capable of biting, regardless of breed, sex, or size… BSL has not been shown to effectively decrease the incidence of dog bites. Dog Bite Prevention should instead focus on an individual dog’s behavior, as well as educating people on the best ways to avoid bites from occurring. With BSL, the veterinary community is put into a challenging position of being asked to identify dog breeds based on appearance, and to report dogs who seem to fit a specified description. Most studies have shown that the visual identification of a breed rarely accurately identified the proper breed when compared to genetic testing.”