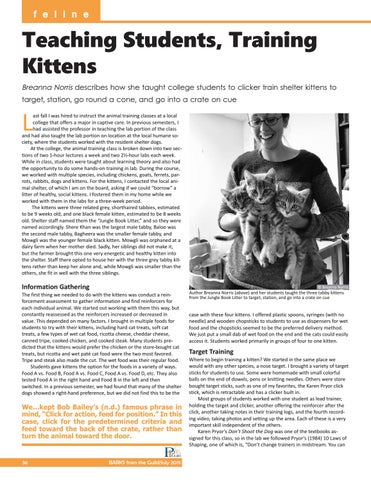 Teaching Students, Training Kittens Breanna Norris describes how she taught college students to clicker train shelter kittens to target, station, go round a cone, and go into a crate on cue

ast fall I was hired to instruct the animal training classes at a local college that offers a major in captive care. In previous semesters, I had assisted the professor in teaching the lab portion of the class and had also taught the lab portion on location at the local humane society, where the students worked with the resident shelter dogs. At the college, the animal training class is broken down into two sections of two 1-hour lectures a week and two 2½-hour labs each week. While in class, students were taught about learning theory and also had the opportunity to do some hands-on training in lab. During the course, we worked with multiple species, including chickens, goats, ferrets, parrots, rabbits, dogs and kittens. For the kittens, I contacted the local animal shelter, of which I am on the board, asking if we could “borrow” a litter of healthy, social kittens. I fostered them in my home while we worked with them in the labs for a three-week period. The kittens were three related grey, shorthaired tabbies, estimated to be 9 weeks old, and one black female kitten, estimated to be 8 weeks old. Shelter staff named them the “Jungle Book Litter,” and so they were named accordingly. Shere Khan was the largest male tabby, Baloo was the second male tabby, Bagheera was the smaller female tabby, and Mowgli was the younger female black kitten. Mowgli was orphaned at a dairy farm when her mother died. Sadly, her siblings did not make it, but the farmer brought this one very energetic and healthy kitten into the shelter. Staff there opted to house her with the three grey tabby kittens rather than keep her alone and, while Mowgli was smaller than the others, she fit in well with the three siblings.

The first thing we needed to do with the kittens was conduct a reinforcement assessment to gather information and find reinforcers for each individual animal. We started out working with them this way, but constantly reassessed as the reinforcers increased or decreased in value. This depended on many factors. I brought in multiple foods for students to try with their kittens, including hard cat treats, soft cat treats, a few types of wet cat food, ricotta cheese, cheddar cheese, canned tripe, cooked chicken, and cooked steak. Many students predicted that the kittens would prefer the chicken or the store-bought cat treats, but ricotta and wet paté cat food were the two most favored. Tripe and steak also made the cut. The wet food was their regular food. Students gave kittens the option for the foods in a variety of ways. Food A vs. Food B, Food A vs. Food C, Food A vs. Food D, etc. They also tested Food A in the right hand and Food B in the left and then switched. In a previous semester, we had found that many of the shelter dogs showed a right-hand preference, but we did not find this to be the

We…kept Bob Bailey’s (n.d.) famous phrase in mind, “Click for action, feed for position.” In this case, click for the predetermined criteria and feed toward the back of the crate, rather than turn the animal toward the door.

Author Breanna Norris (above) and her students taught the three tabby kittens from the Jungle Book Litter to target, station, and go into a crate on cue

case with these four kittens. I offered plastic spoons, syringes (with no needle) and wooden chopsticks to students to use as dispensers for wet food and the chopsticks seemed to be the preferred delivery method. We just put a small dab of wet food on the end and the cats could easily access it. Students worked primarily in groups of four to one kitten.

Target Training Where to begin training a kitten? We started in the same place we would with any other species, a nose target. I brought a variety of target sticks for students to use. Some were homemade with small colorful balls on the end of dowels, pens or knitting needles. Others were store bought target sticks, such as one of my favorites, the Karen Pryor click stick, which is retractable and has a clicker built in. Most groups of students worked with one student as lead trainer, holding the target and clicker, another offering the reinforcer after the click, another taking notes in their training logs, and the fourth recording video, taking photos and setting up the area. Each of these is a very important skill independent of the others. Karen Pryor’s Don’t Shoot the Dog was one of the textbooks assigned for this class, so in the lab we followed Pryor’s (1984) 10 Laws of Shaping, one of which is, “Don’t change trainers in midstream. You can