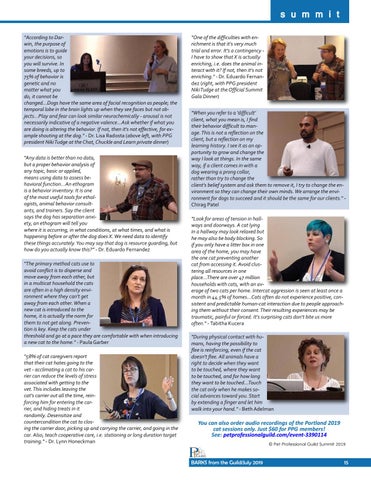 s u m m i t “According to Dar‐ win, the purpose of emotions is to guide your decisions, so you will survive. In some breeds, up to 75% of behavior is genetic and no matter what you do, it cannot be changed...Dogs have the same area of facial recognition as people; the temporal lobe in the brain lights up when they see faces but not ob‐ jects...Play and fear can look similar neurochemically ‐ arousal is not necessarily indicative of a negative valence...Ask whether if what you are doing is altering the behavior. If not, then it&#39;s not effective, for ex‐ ample shouting at the dog.&quot; ‐ Dr. Lisa Radosta (above left, with PPG president Niki Tudge at the Chat, Chuckle and Learn private dinner) &quot;Any data is better than no data, but a proper behavior analysis of any topic, basic or applied, means using data to assess be‐ havioral function...An ethogram is a behavior inventory. It is one of the most useful tools for ethol‐ ogists, animal behavior consult‐ ants, and trainers. Say the client says the dog has separation anxi‐ ety, an ethogram will tell you where it is occurring, in what conditions, at what times, and what is happening before or after the dog does X. We need data to identify these things accurately. You may say that dog is resource guarding, but how do you actually know this?” ‐ Dr. Eduardo Fernandez &quot;The primary method cats use to avoid conflict is to disperse and move away from each other, but in a multicat household the cats are often in a high density envi‐ ronment where they can&#39;t get away from each other. When a new cat is introduced to the home, it is actually the norm for them to not get along. Preven‐ tion is key. Keep the cats under threshold and go at a pace they are comfortable with when introducing a new cat to the home.&quot; ‐ Paula Garber &quot;58% of cat caregivers report that their cat hates going to the vet ‐ acclimating a cat to his car‐ rier can reduce the levels of stress associated with getting to the vet. This includes leaving the cat&#39;s carrier out all the time, rein‐ forcing him for entering the car‐ rier, and hiding treats in it randomly. Desensitize and countercondition the cat to clos‐ ing the carrier door, picking up and carrying the carrier, and going in the car. Also, teach cooperative care, i.e. stationing or long duration target training.&quot; ‐ Dr. Lynn Honeckman

&quot;One of the difficulties with en‐ richment is that it&#39;s very much trial and error. It&#39;s a contingency ‐ I have to show that X is actually enriching, i.e. does the animal in‐ teract with it? If not, then it&#39;s not enriching.&quot; ‐ Dr. Eduardo Fernan‐ dez (right, with PPG president Niki Tudge at the Official Summit Gala Dinner) &quot;When you refer to a &#39;difficult&#39; client, what you mean is, I find their behavior difficult to man‐ age. This is not a reflection on the client, but a reflection on my learning history. I see it as an op‐ portunity to grow and change the way I look at things. In the same way, if a client comes in with a dog wearing a prong collar, rather than try to change the client&#39;s belief system and ask them to remove it, I try to change the en‐ vironment so they can change their own minds. We arrange the envi‐ ronment for dogs to succeed and it should be the same for our clients.&quot; ‐ Chirag Patel &quot;Look for areas of tension in hall‐ ways and doorways. A cat lying in a hallway may look relaxed but he may also be body blocking. So if you only have a litter box in one area of the home, you may have the one cat preventing another cat from accessing it. Avoid clus‐ tering all resources in one place...There are over 47 million households with cats, with an av‐ erage of two cats per home. Intercat aggression is seen at least once a month in 44.5% of homes...Cats often do not experience positive, con‐ sistent and predictable human‐cat interaction due to people approach‐ ing them without their consent. Their resulting experiences may be traumatic, painful or forced. It&#39;s surprising cats don&#39;t bite us more often.&quot; ‐ Tabitha Kucera &quot;During physical contact with hu‐ mans, having the possibility to flee is reinforcing, even if the cat doesn&#39;t flee. All animals have a right to decide when they want to be touched, where they want to be touched, and for how long they want to be touched...Touch the cat only when he makes so‐ cial advances toward you. Start by extending a finger and let him walk into your hand.&quot; ‐ Beth Adelman