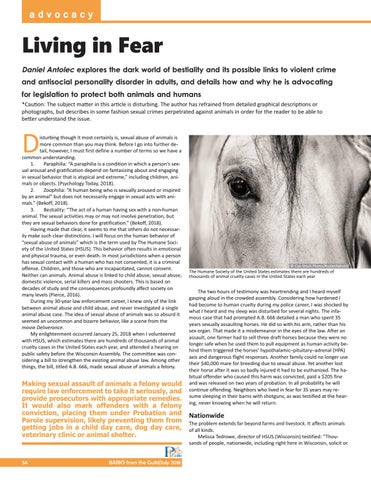 and antisocial personality disorder in adults, and details how and why he is advocating

for legislation to protect both animals and humans

*Caution: The subject matter in this article is disturbing. The author has refrained from detailed graphical descriptions or photographs, but describes in some fashion sexual crimes perpetrated against animals in order for the reader to be able to better understand the issue. isturbing though it most certainly is, sexual abuse of animals is more common than you may think. Before I go into further detail, however, I must first define a number of terms so we have a common understanding. 1. Paraphilia: “A paraphilia is a condition in which a person’s sexual arousal and gratification depend on fantasizing about and engaging in sexual behavior that is atypical and extreme,” including children, animals or objects. (Psychology Today, 2018). 2. Zoophilia: “A human being who is sexually aroused or inspired by an animal” but does not necessarily engage in sexual acts with animals.” (Bekoff, 2018). 3. Bestiality: “The act of a human having sex with a non-human animal. The sexual activities may or may not involve penetration, but they are sexual behaviors done for gratification.” (Bekoff, 2018). Having made that clear, it seems to me that others do not necessarily make such clear distinctions. I will focus on the human behavior of “sexual abuse of animals” which is the term used by The Humane Society of the United States (HSUS). This behavior often results in emotional and physical trauma, or even death. In most jurisdictions when a person has sexual contact with a human who has not consented, it is a criminal offense. Children, and those who are incapacitated, cannot consent. Neither can animals. Animal abuse is linked to child abuse, sexual abuse, domestic violence, serial killers and mass shooters. This is based on decades of study and the consequences profoundly affect society on many levels (Pierce, 2016). During my 30-year law enforcement career, I knew only of the link between animal abuse and child abuse, and never investigated a single animal abuse case. The idea of sexual abuse of animals was so absurd it seemed an uncommon and bizarre behavior, like a scene from the movie Deliverance. My enlightenment occurred January 25, 2018 when I volunteered with HSUS, which estimates there are hundreds of thousands of animal cruelty cases in the United States each year, and attended a hearing on public safety before the Wisconsin Assembly. The committee was considering a bill to strengthen the existing animal abuse law. Among other things, the bill, titled A.B. 666, made sexual abuse of animals a felony.

Making sexual assault of animals a felony would require law enforcement to take it seriously, and provide prosecutors with appropriate remedies. It would also mark offenders with a felony conviction, placing them under Probation and Parole supervision, likely preventing them from getting jobs in a child day care, dog day care, veterinary clinic or animal shelter. 54

The two hours of testimony was heartrending and I heard myself gasping aloud in the crowded assembly. Considering how hardened I had become to human cruelty during my police career, I was shocked by what I heard and my sleep was disturbed for several nights. The infamous case that had prompted A.B. 666 detailed a man who spent 35 years sexually assaulting horses. He did so with his arm, rather than his sex organ. That made it a misdemeanor in the eyes of the law. After an assault, one farmer had to sell three draft horses because they were no longer safe when he used them to pull equipment as human activity behind them triggered the horses’ hypothalamic–pituitary–adrenal (HPA) axis and dangerous flight responses. Another family could no longer use their $40,000 mare for breeding due to sexual abuse. Yet another lost their horse after it was so badly injured it had to be euthanized. The habitual offender who caused this harm was convicted, paid a $205 fine and was released on two years of probation. In all probability he will continue offending. Neighbors who lived in fear for 35 years may resume sleeping in their barns with shotguns, as was testified at the hearing, never knowing when he will return.

The problem extends far beyond farms and livestock. It affects animals of all kinds. Melissa Tedrowe, director of HSUS (Wisconsin) testified: “Thousands of people, nationwide, including right here in Wisconsin, solicit or