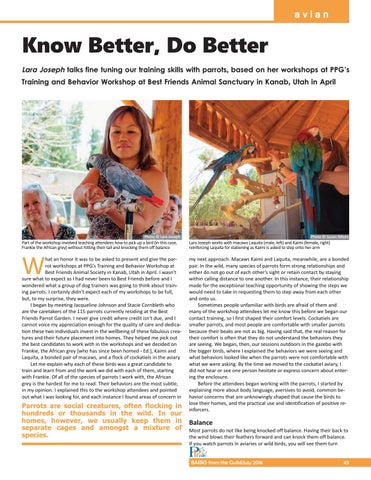 Lara Joseph talks fine tuning our training skills with parrots, based on her workshops at PPG’s

Part of the workshop involved teaching attendees how to pick up a bird (in this case, Frankie the African grey) without hitting their tail and knocking them off balance

hat an honor it was to be asked to present and give the parrot workshops at PPG’s Training and Behavior Workshop at Best Friends Animal Society in Kanab, Utah in April. I wasn&#39;t sure what to expect as I had never been to Best Friends before and I wondered what a group of dog trainers was going to think about training parrots. I certainly didn&#39;t expect each of my workshops to be full, but, to my surprise, they were. I began by meeting Jacqueline Johnson and Stacie Cornbleth who are the caretakers of the 115 parrots currently residing at the Best Friends Parrot Garden. I never give credit where credit isn&#39;t due, and I cannot voice my appreciation enough for the quality of care and dedication these two individuals invest in the wellbeing of these fabulous creatures and their future placement into homes. They helped me pick out the best candidates to work with in the workshops and we decided on Frankie, the African grey [who has since been homed - Ed.], Kaimi and Laquita, a bonded pair of macaws, and a flock of cockatiels in the aviary. Let me explain why each of these birds was a great candidate to train and learn from and the work we did with each of them, starting with Frankie. Of all of the species of parrots I work with, the African grey is the hardest for me to read. Their behaviors are the most subtle, in my opinion. I explained this to the workshop attendees and pointed out what I was looking for, and each instance I found areas of concern in

Parrots are social creatures, often flocking in hundreds or thousands in the wild. In our homes, however, we usually keep them in separate cages and amongst a mixture of species.

Lara Joseph works with macaws Laquita (male, left) and Kaimi (female, right) reinforcing Laquita for stationing as Kaimi is asked to step onto her arm

my next approach. Macaws Kaimi and Laquita, meanwhile, are a bonded pair. In the wild, many species of parrots form strong relationships and either do not go out of each other&#39;s sight or retain contact by staying within calling distance to one another. In this instance, their relationship made for the exceptional teaching opportunity of showing the steps we would need to take in requesting them to step away from each other and onto us. Sometimes people unfamiliar with birds are afraid of them and many of the workshop attendees let me know this before we began our contact training, so I first shaped their comfort levels. Cockatiels are smaller parrots, and most people are comfortable with smaller parrots because their beaks are not as big. Having said that, the real reason for their comfort is often that they do not understand the behaviors they are seeing. We began, then, our sessions outdoors in the gazebo with the bigger birds, where I explained the behaviors we were seeing and what behaviors looked like when the parrots were not comfortable with what we were asking. By the time we moved to the cockatiel aviary, I did not hear or see one person hesitate or express concern about entering the enclosure. Before the attendees began working with the parrots, I started by explaining more about body language, aversives to avoid, common behavior concerns that are unknowingly shaped that cause the birds to lose their homes, and the practical use and identification of positive reinforcers.

Most parrots do not like being knocked off balance. Having their back to the wind blows their feathers forward and can knock them off balance. If you watch parrots in aviaries or wild birds, you will see them turn BARKS from the Guild/July 2018