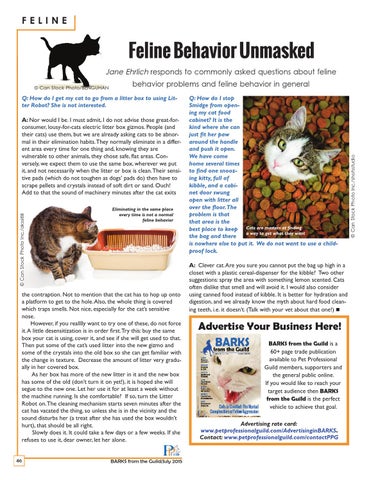 Q: How do I get my cat to go from a litter box to using Litter Robot? She is not interested.

A: Nor would I be. I must admit, I do not advise those great-forconsumer, lousy-for-cats electric litter box gizmos. People (and their cats) use them, but we are already asking cats to be abnormal in their elimination habits. They normally eliminate in a different area every time for one thing and, knowing they are vulnerable to other animals, they chose safe, flat areas. Conversely, we expect them to use the same box, wherever we put it, and not necessarily when the litter or box is clean. Their sensitive pads (which do not toughen as dogs’ pads do) then have to scrape pellets and crystals instead of soft dirt or sand. Ouch! Add to that the sound of machinery minutes after the cat exits Eliminating in the same place every time is not a normal feline behavior

the contraption. Not to mention that the cat has to hop up onto a platform to get to the hole. Also, the whole thing is covered which traps smells. Not nice, especially for the cat’s sensitive nose. However, if you realllly want to try one of these, do not force it. A little desensitization is in order first. Try this: buy the same box your cat is using, cover it, and see if she will get used to that. Then put some of the cat’s used litter into the new gizmo and some of the crystals into the old box so she can get familiar with the change in texture. Decrease the amount of litter very gradually in her covered box. As her box has more of the new litter in it and the new box has some of the old (don’t turn it on yet!), it is hoped she will segue to the new one. Let her use it for at least a week without the machine running. Is she comfortable? If so, turn the Litter Robot on. The cleaning mechanism starts seven minutes after the cat has vacated the thing, so unless she is in the vicinity and the sound disturbs her (a treat after she has used the box wouldn’t hurt), that should be all right. Slowly does it. It could take a few days or a few weeks. If she refuses to use it, dear owner, let her alone.

Q: How do I stop Smidge from opening my cat food cabinet? It is the kind where she can just fit her paw around the handle and push it open. We have come home several times to find one snoozing kitty, full of kibble, and a cabinet door swung open with litter all over the floor.The problem is that that area is the best place to keep Cats are masters at finding a way to get what they want the bag and there is nowhere else to put it. We do not want to use a childproof lock.

A: Clever cat. Are you sure you cannot put the bag up high in a closet with a plastic cereal-dispenser for the kibble? Two other suggestions: spray the area with something lemon scented. Cats often dislike that smell and will avoid it. I would also consider using canned food instead of kibble. It is better for hydration and digestion, and we already know the myth about hard food cleaning teeth, i.e. it doesn’t. (Talk with your vet about that one!) n