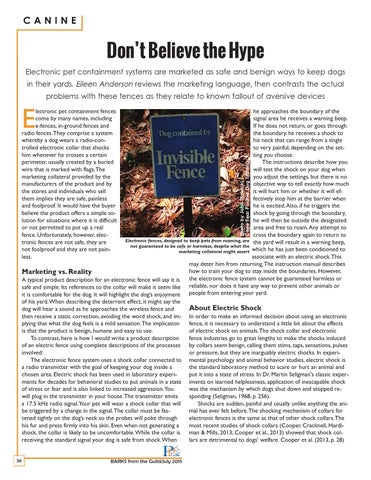 Electronic pet containment systems are marketed as safe and benign ways to keep dogs in their yards. Eileen Anderson reviews the marketing language, then contrasts the actual

lectronic pet containment fences come by many names, including e-fences, in-ground fences and radio fences. They comprise a system whereby a dog wears a radio-controlled electronic collar that shocks him whenever he crosses a certain perimeter, usually created by a buried wire that is marked with flags. The marketing collateral provided by the manufacturers of the product and by the stores and individuals who sell them implies they are safe, painless and foolproof. It would have the buyer believe the product offers a simple solution for situations where it is difficult or not permitted to put up a real fence. Unfortunately, however, electronic fences are not safe, they are not foolproof and they are not painless.

he approaches the boundary of the signal area he receives a warning beep. If he does not return, or goes through the boundary, he receives a shock to his neck that can range from a tingle to very painful, depending on the setting you choose. The instructions describe how you will test the shock on your dog when you adjust the settings, but there is no objective way to tell exactly how much it will hurt him or whether it will effectively stop him at the barrier when he is excited. Also, if he triggers the shock by going through the boundary, he will then be outside the designated area and free to roam. Any attempt to cross the boundary again to return to Electronic fences, designed to keep pets from roaming, are the yard will result in a warning beep, not guaranteed to be safe or harmless, despite what the marketing collateral might assert which he has just been conditioned to associate with an electric shock. This may deter him from returning. The instruction manual describes how to train your dog to stay inside the boundaries. However, Marketing vs. Reality the electronic fence system cannot be guaranteed harmless or A typical product description for an electronic fence will say it is reliable, nor does it have any way to prevent other animals or safe and simple. Its references to the collar will make it seem like people from entering your yard. it is comfortable for the dog. It will highlight the dog’s enjoyment of his yard. When describing the deterrent effect, it might say the About Electric Shock dog will hear a sound as he approaches the wireless fence and then receive a static correction, avoiding the word shock, and im- In order to make an informed decision about using an electronic plying that what the dog feels is a mild sensation. The implication fence, it is necessary to understand a little bit about the effects of electric shock on animals. The shock collar and electronic is that the product is benign, humane and easy to use. fence industries go to great lengths to make the shocks induced To contrast, here is how I would write a product description of an electric fence using complete descriptions of the processes by collars seem benign, calling them stims, taps, sensations, pulses or pressure, but they are inarguably electric shocks. In experiinvolved: The electronic fence system uses a shock collar connected to mental psychology and animal behavior studies, electric shock is the standard laboratory method to scare or hurt an animal and a radio transmitter with the goal of keeping your dog inside a put it into a state of stress. In Dr. Martin Seligman&#39;s classic experchosen area. Electric shock has been used in laboratory experiments for decades for behavioral studies to put animals in a state iments on learned helplessness, application of inescapable shock was the mechanism by which dogs shut down and stopped reof stress or fear and is also linked to increased aggression.You sponding (Seligman, 1968, p. 256). will plug in the transmitter in your house. The transmitter emits Shocks are sudden, painful and usually unlike anything the ania 17.5 kHz radio signal.Your pet will wear a shock collar that will mal has ever felt before. The shocking mechanism of collars for be triggered by a change in the signal. The collar must be faselectronic fences is the same as that of other shock collars. The tened tightly on the dog’s neck so the probes will poke through most recent studies of shock collars (Cooper, Cracknell, Hardihis fur and press firmly into his skin. Even when not generating a shock, the collar is likely to be uncomfortable. While the collar is man &amp; Mills, 2013; Cooper et al., 2013) showed that shock collars are detrimental to dogs’ welfare. Cooper et al. (2013, p. 28) receiving the standard signal your dog is safe from shock. When