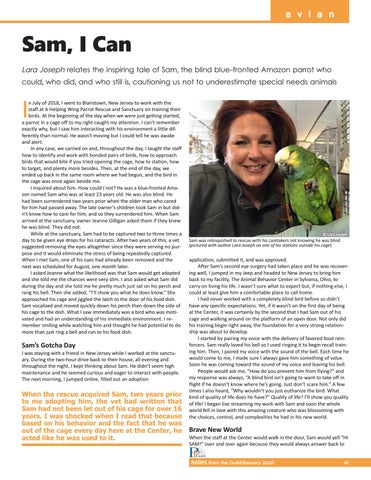 Sam, I Can Lara Joseph relates the inspiring tale of Sam, the blind blue-fronted Amazon parrot who could, who did, and who still is, cautioning us not to underestimate special needs animals

n July of 2018, I went to Blairstown, New Jersey to work with the staff at A Helping Wing Parrot Rescue and Sanctuary on training their birds. At the beginning of the day when we were just getting started, a parrot in a cage off to my right caught my attention. I can’t remember exactly why, but I saw him interacting with his environment a little dif­ ferently than normal. He wasn’t moving but I could tell he was awake and alert. In any case, we carried on and, throughout the day, I taught the staff how to identify and work with bonded pairs of birds, how to approach birds that would bite if you tried opening the cage, how to station, how to target, and plenty more besides. Then, at the end of the day, we ended up back in the same room where we had begun, and the bird in the cage was once again beside me. I inquired about him. How could I not? He was a blue­fronted Ama­ zon named Sam who was at least 23 years old. He was also blind. He had been surrendered two years prior when the older man who cared for him had passed away. The late owner’s children took Sam in but did­ n’t know how to care for him, and so they surrendered him. When Sam arrived at the sanctuary, owner Jeanne Gilligan asked them if they knew he was blind. They did not. While at the sanctuary, Sam had to be captured two to three times a day to be given eye drops for his cataracts. After two years of this, a vet suggested removing the eyes altogether since they were serving no pur­ pose and it would eliminate the stress of being repeatedly captured. When I met Sam, one of his eyes had already been removed and the next was scheduled for August, one month later. I asked Jeanne what the likelihood was that Sam would get adopted and she told me the chances were very slim. I also asked what Sam did during the day and she told me he pretty much just sat on his perch and rang his bell. Then she added, “I’ll show you what he does know.” She approached his cage and jiggled the latch to the door of his food dish. Sam vocalized and moved quickly down his perch then down the side of his cage to the dish. What I saw immediately was a bird who was moti­ vated and had an understanding of his immediate environment. I re­ member smiling while watching him and thought he had potential to do more than just ring a bell and run to his food dish.

Sam’s Gotcha Day I was staying with a friend in New Jersey while I worked at the sanctu­ ary. During the two­hour drive back to their house, all evening and throughout the night, I kept thinking about Sam. He didn’t seem high maintenance and he seemed curious and eager to interact with people. The next morning, I jumped online, filled out an adoption

When the rescue acquired Sam, two years prior to me adopting him, the vet had written that Sam had not been let out of his cage for over 16 years. I was shocked when I read that because based on his behavior and the fact that he was out of the cage every day here at the Center, he acted like he was used to it.

application, submitted it, and was approved. After Sam’s second eye surgery had taken place and he was recover­ ing well, I jumped in my Jeep and headed to New Jersey to bring him back to my facility, The Animal Behavior Center in Sylvania, Ohio, to carry on living his life. I wasn’t sure what to expect but, if nothing else, I could at least give him a comfortable place to call home. I had never worked with a completely blind bird before so didn’t have any specific expectations. Yet, if it wasn’t on the first day of being at the Center, it was certainly by the second that I had Sam out of his cage and walking around on the platform of an open door. Not only did his training begin right away, the foundation for a very strong relation­ ship was about to develop. I started by pairing my voice with the delivery of favored food rein­ forcers. Sam really loved his bell so I used ringing it to begin recall train­ ing him. Then, I paired my voice with the sound of the bell. Each time he would come to me, I made sure I always gave him something of value. Soon he was coming toward the sound of my voice and leaving his bell. People would ask me, “How do you prevent him from flying?” and my response was always, “A blind bird isn’t going to want to take off in flight if he doesn’t know where he’s going. Just don’t scare him.” A few times I also heard, “Why wouldn’t you just euthanize the bird. What kind of quality of life does he have?” Quality of life? I’ll show you quality of life! I began live streaming my work with Sam and soon the whole world fell in love with this amazing creature who was blossoming with the choices, control, and complexities he had in his new world.

Brave New World When the staff at the Center would walk in the door, Sam would yell “HI SAM!” over and over again because they would always answer back to