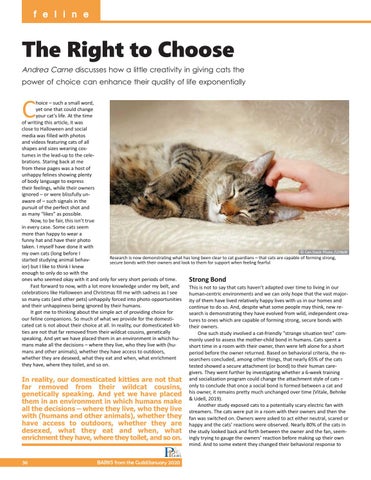 hoice – such a small word, yet one that could change your cat’s life. At the time of writing this article, it was close to Halloween and social media was filled with photos and videos featuring cats of all shapes and sizes wearing cos­ tumes in the lead­up to the cele­ brations. Staring back at me from these pages was a host of unhappy felines showing plenty of body language to express their feelings, while their owners ignored – or were blissfully un­ aware of – such signals in the pursuit of the perfect shot and as many “likes” as possible. Now, to be fair, this isn’t true in every case. Some cats seem more than happy to wear a funny hat and have their photo taken. I myself have done it with © Can Stock Photo /LENblR my own cats (long before I Research is now demonstrating what has long been clear to cat guardians – that cats are capable of forming strong, started studying animal behav­ secure bonds with their owners and look to them for support when feeling fearful ior) but I like to think I knew enough to only do so with the ones who seemed okay with it and only for very short periods of time. Strong Bond Fast forward to now, with a lot more knowledge under my belt, and This is not to say that cats haven’t adapted over time to living in our celebrations like Halloween and Christmas fill me with sadness as I see human­centric environments and we can only hope that the vast major­ so many cats (and other pets) unhappily forced into photo opportunities ity of them have lived relatively happy lives with us in our homes and and their unhappiness being ignored by their humans. continue to do so. And, despite what some people may think, new re­ It got me to thinking about the simple act of providing choice for search is demonstrating they have evolved from wild, independent crea­ our feline companions. So much of what we provide for the domesti­ tures to ones which are capable of forming strong, secure bonds with cated cat is not about their choice at all. In reality, our domesticated kit­ their owners. ties are not that far removed from their wildcat cousins, genetically One such study involved a cat­friendly “strange situation test” com­ speaking. And yet we have placed them in an environment in which hu­ monly used to assess the mother­child bond in humans. Cats spent a mans make all the decisions – where they live, who they live with (hu­ short time in a room with their owner, then were left alone for a short mans and other animals), whether they have access to outdoors, period before the owner returned. Based on behavioral criteria, the re­ whether they are desexed, what they eat and when, what enrichment searchers concluded, among other things, that nearly 65% of the cats they have, where they toilet, and so on. tested showed a secure attachment (or bond) to their human care­ givers. They went further by investigating whether a 6­week training In reality, our domesticated kitties are not that and socialization program could change the attachment style of cats – far removed from their wildcat cousins, only to conclude that once a social bond is formed between a cat and genetically speaking. And yet we have placed his owner, it remains pretty much unchanged over time (Vitale, Behnke 2019). them in an environment in which humans make &amp; Udell, Another study exposed cats to a potentially scary electric fan with all the decisions – where they live, who they live streamers. The cats were put in a room with their owners and then the with (humans and other animals), whether they fan was switched on. Owners were asked to act either neutral, scared or have access to outdoors, whether they are happy and the cats’ reactions were observed. Nearly 80% of the cats in desexed, what they eat and when, what the study looked back and forth between the owner and the fan, seem­ enrichment they have, where they toilet, and so on. ingly trying to gauge the owners’ reaction before making up their own mind. And to some extent they changed their behavioral response to 36