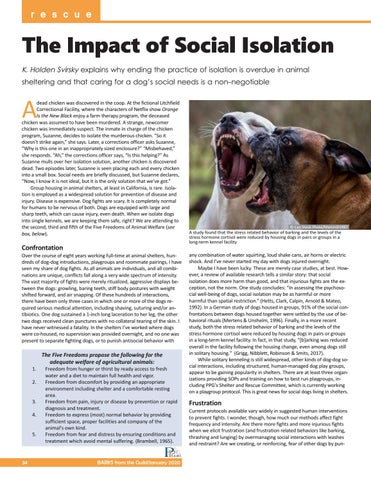 The Impact of Social Isolation K. Holden Svirsky explains why ending the practice of isolation is overdue in animal sheltering and that caring for a dog’s social needs is a non-negotiable

dead chicken was discovered in the coop. At the fictional Litchfield Correctional Facility, where the characters of Netflix show Orange Is the New Black enjoy a farm therapy program, the deceased chicken was assumed to have been murdered. A strange, newcomer chicken was immediately suspect. The inmate in charge of the chicken program, Suzanne, decides to isolate the murderous chicken. “So it doesn’t strike again,” she says. Later, a corrections officer asks Suzanne, “Why is this one in an inappropriately sized enclosure?” “Misbehaved,” she responds. “Ah,” the corrections officer says, “Is this helping?” As Suzanne mulls over her isolation solution, another chicken is discovered dead. Two episodes later, Suzanne is seen placing each and every chicken into a small box. Social needs are briefly discussed, but Suzanne declares, “Now, I know it is not ideal, but it is the only solution that we’ve got.” Group housing in animal shelters, at least in California, is rare. Isola­ tion is employed as a widespread solution for prevention of disease and injury. Disease is expensive. Dog fights are scary. It is completely normal for humans to be nervous of both. Dogs are equipped with large and sharp teeth, which can cause injury, even death. When we isolate dogs into single kennels, we are keeping them safe, right? We are attending to the second, third and fifth of the Five Freedoms of Animal Welfare (see box, below).

Confrontation Over the course of eight years working full­time at animal shelters, hun­ dreds of dog­dog introductions, playgroups and roommate pairings, I have seen my share of dog fights. As all animals are individuals, and all combi­ nations are unique, conflicts fall along a very wide spectrum of intensity. The vast majority of fights were merely ritualized, aggressive displays be­ tween the dogs: growling, baring teeth, stiff body postures with weight shifted forward, and air snapping. Of these hundreds of interactions, there have been only three cases in which one or more of the dogs re­ quired serious medical attention, including shaving, suturing and/or an­ tibiotics. One dog sustained a 1­inch long laceration to her leg, the other two dogs received clean punctures with no collateral tearing of the skin. I have never witnessed a fatality. In the shelters I’ve worked where dogs were co­housed, no supervision was provided overnight, and no one was present to separate fighting dogs, or to punish antisocial behavior with

The Five Freedoms propose the following for the adequate welfare of agricultural animals: 1. 2.

Freedom from hunger or thirst by ready access to fresh water and a diet to maintain full health and vigor. Freedom from discomfort by providing an appropriate environment including shelter and a comfortable resting area. Freedom from pain, injury or disease by prevention or rapid diagnosis and treatment. Freedom to express (most) normal behavior by providing sufficient space, proper facilities and company of the animal&#39;s own kind. Freedom from fear and distress by ensuring conditions and treatment which avoid mental suffering. (Brambell, 1965).

any combination of water squirting, loud shake cans, air horns or electric shock. And I’ve never started my day with dogs injured overnight. Maybe I have been lucky. These are merely case studies, at best. How­ ever, a review of available research tells a similar story: that social isolation does more harm than good, and that injurious fights are the ex­ ception, not the norm. One study concludes: “In assessing the psychoso­ cial well­being of dogs, social isolation may be as harmful or more harmful than spatial restriction.” (Hetts, Clark, Calpin, Arnold &amp; Mateo, 1992). In a German study of dogs housed in groups, 91% of the social con­ frontations between dogs housed together were settled by the use of be­ havioral rituals (Mertens &amp; Unshelm, 1996). Finally, in a more recent study, both the stress related behavior of barking and the levels of the stress hormone cortisol were reduced by housing dogs in pairs or groups in a long­term kennel facility. In fact, in that study, &quot;[b]arking was reduced overall in the facility following the housing change, even among dogs still in solitary housing.&quot; (Grigg, Nibblett, Robinson &amp; Smits, 2017). While solitary kenneling is still widespread, other kinds of dog­dog so­ cial interactions, including structured, human­managed dog play groups, appear to be gaining popularity in shelters. There are at least three organ­ izations providing SOPs and training on how to best run playgroups, in­ cluding PPG&#39;s Shelter and Rescue Committee, which is currently working on a playgroup protocol. This is great news for social dogs living in shelters.

Frustration Current protocols available vary widely in suggested human interventions to prevent fights. I wonder, though, how much our methods affect fight frequency and intensity. Are there more fights and more injurious fights when we elicit frustration (and frustration related behaviors like barking, thrashing and lunging) by overmanaging social interactions with leashes and restraint? Are we creating, or reinforcing, fear of other dogs by pun­