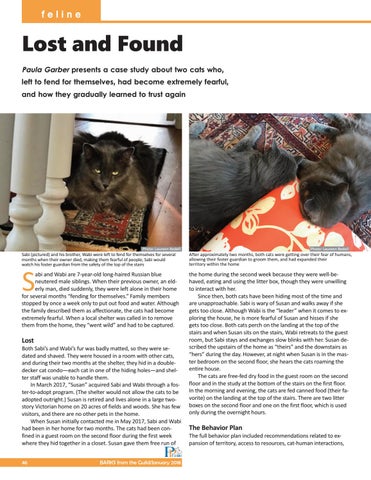 Paula Garber presents a case study about two cats who,

left to fend for themselves, had become extremely fearful,

and how they gradually learned to trust again

Sabi (pictured) and his brother, Wabi were left to fend for themselves for several months when their owner died, making them fearful of people; Sabi would watch his foster guardian from the safety of the top of the stairs

abi and Wabi are 7-year-old long-haired Russian blue neutered male siblings. When their previous owner, an elderly man, died suddenly, they were left alone in their home for several months “fending for themselves.” Family members stopped by once a week only to put out food and water. Although the family described them as affectionate, the cats had become extremely fearful. When a local shelter was called in to remove them from the home, they “went wild” and had to be captured.

Both Sabi’s and Wabi’s fur was badly matted, so they were sedated and shaved. They were housed in a room with other cats, and during their two months at the shelter, they hid in a doubledecker cat condo—each cat in one of the hiding holes—and shelter staff was unable to handle them. In March 2017, “Susan” acquired Sabi and Wabi through a foster-to-adopt program. (The shelter would not allow the cats to be adopted outright.) Susan is retired and lives alone in a large twostory Victorian home on 20 acres of fields and woods. She has few visitors, and there are no other pets in the home. When Susan initially contacted me in May 2017, Sabi and Wabi had been in her home for two months. The cats had been confined in a guest room on the second floor during the first week where they hid together in a closet. Susan gave them free run of 46

After approximately two months, both cats were getting over their fear of humans, allowing their foster guardian to groom them, and had expanded their territory within the home

the home during the second week because they were well-behaved, eating and using the litter box, though they were unwilling to interact with her. Since then, both cats have been hiding most of the time and are unapproachable. Sabi is wary of Susan and walks away if she gets too close. Although Wabi is the “leader” when it comes to exploring the house, he is more fearful of Susan and hisses if she gets too close. Both cats perch on the landing at the top of the stairs and when Susan sits on the stairs, Wabi retreats to the guest room, but Sabi stays and exchanges slow blinks with her. Susan described the upstairs of the home as “theirs” and the downstairs as “hers” during the day. However, at night when Susan is in the master bedroom on the second floor, she hears the cats roaming the entire house. The cats are free-fed dry food in the guest room on the second floor and in the study at the bottom of the stairs on the first floor. In the morning and evening, the cats are fed canned food (their favorite) on the landing at the top of the stairs. There are two litter boxes on the second floor and one on the first floor, which is used only during the overnight hours.