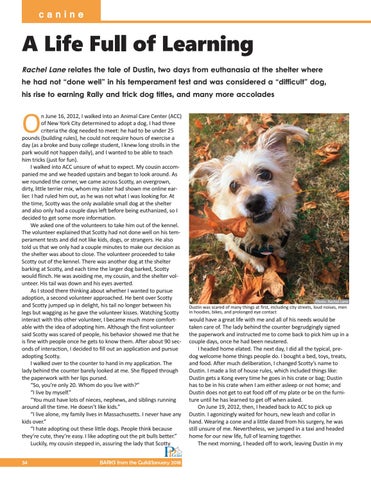 A Life Full of Learning

Rachel Lane relates the tale of Dustin, two days from euthanasia at the shelter where

he had not “done well” in his temperament test and was considered a “difficult” dog,

his rise to earning Rally and trick dog titles, and many more accolades n June 16, 2012, I walked into an Animal Care Center (ACC) of New York City determined to adopt a dog. I had three criteria the dog needed to meet: he had to be under 25 pounds (building rules), he could not require hours of exercise a day (as a broke and busy college student, I knew long strolls in the park would not happen daily), and I wanted to be able to teach him tricks (just for fun). I walked into ACC unsure of what to expect. My cousin accompanied me and we headed upstairs and began to look around. As we rounded the corner, we came across Scotty, an overgrown, dirty, little terrier mix, whom my sister had shown me online earlier. I had ruled him out, as he was not what I was looking for. At the time, Scotty was the only available small dog at the shelter and also only had a couple days left before being euthanized, so I decided to get some more information. We asked one of the volunteers to take him out of the kennel. The volunteer explained that Scotty had not done well on his temperament tests and did not like kids, dogs, or strangers. He also told us that we only had a couple minutes to make our decision as the shelter was about to close. The volunteer proceeded to take Scotty out of the kennel. There was another dog at the shelter barking at Scotty, and each time the larger dog barked, Scotty would flinch. He was avoiding me, my cousin, and the shelter volunteer. His tail was down and his eyes averted. As I stood there thinking about whether I wanted to pursue adoption, a second volunteer approached. He bent over Scotty and Scotty jumped up in delight, his tail no longer between his legs but wagging as he gave the volunteer kisses. Watching Scotty interact with this other volunteer, I became much more comfortable with the idea of adopting him. Although the first volunteer said Scotty was scared of people, his behavior showed me that he is fine with people once he gets to know them. After about 90 seconds of interaction, I decided to fill out an application and pursue adopting Scotty. I walked over to the counter to hand in my application. The lady behind the counter barely looked at me. She flipped through the paperwork with her lips pursed. “So, you’re only 20. Whom do you live with?” “I live by myself.” “You must have lots of nieces, nephews, and siblings running around all the time. He doesn’t like kids.” “I live alone, my family lives in Massachusetts. I never have any kids over.” “I hate adopting out these little dogs. People think because they’re cute, they’re easy. I like adopting out the pit bulls better.” Luckily, my cousin stepped in, assuring the lady that Scotty 34

Dustin was scared of many things at first, including city streets, loud noises, men in hoodies, bikes, and prolonged eye contact

would have a great life with me and all of his needs would be taken care of. The lady behind the counter begrudgingly signed the paperwork and instructed me to come back to pick him up in a couple days, once he had been neutered. I headed home elated. The next day, I did all the typical, predog welcome home things people do. I bought a bed, toys, treats, and food. After much deliberation, I changed Scotty’s name to Dustin. I made a list of house rules, which included things like: Dustin gets a Kong every time he goes in his crate or bag; Dustin has to be in his crate when I am either asleep or not home; and Dustin does not get to eat food off of my plate or be on the furniture until he has learned to get off when asked. On June 19, 2012, then, I headed back to ACC to pick up Dustin. I agonizingly waited for hours, new leash and collar in hand. Wearing a cone and a little dazed from his surgery, he was still unsure of me. Nevertheless, we jumped in a taxi and headed home for our new life, full of learning together. The next morning, I headed off to work, leaving Dustin in my