BARKS from the Guild January 2017 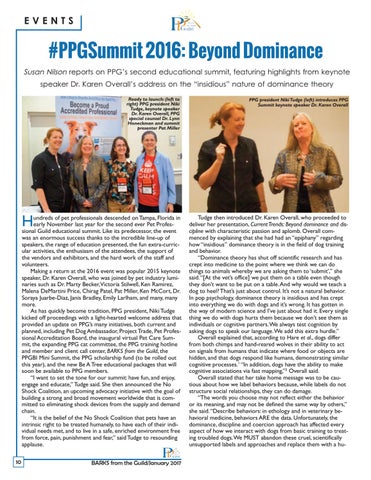 undreds of pet professionals descended on Tampa, Florida in early November last year for the second ever Pet Professional Guild educational summit. Like its predecessor, the event was an enormous success thanks to the incredible line-up of speakers, the range of education presented, the fun extra-curricular activities, the enthusiasm of the attendees, the support of the vendors and exhibitors, and the hard work of the staff and volunteers. Making a return at the 2016 event was popular 2015 keynote speaker, Dr. Karen Overall, who was joined by pet industry luminaries such as Dr. Marty Becker,Victoria Stilwell, Ken Ramirez, Malena DeMartini Price, Chirag Patel, Pat Miller, Ken McCort, Dr. Soraya Juarbe-Diaz, Janis Bradley, Emily Larlham, and many, many more. As has quickly become tradition, PPG president, Niki Tudge kicked off proceedings with a light-hearted welcome address that provided an update on PPG’s many initiatives, both current and planned, including Pet Dog Ambassador, Project Trade, Pet Professional Accreditation Board, the inaugural virtual Pet Care Summit, the expanding PPG cat committee, the PPG training hotline and member and client call center, BARKS from the Guild, the PPGBI Mini Summit, the PPG scholarship fund (to be rolled out this year), and the new Be A Tree educational packages that will soon be available to PPG members. “I want to set the tone for our summit: have fun, and enjoy, engage and educate,” Tudge said. She then announced the No Shock Coalition, an upcoming advocacy initiative with the goal of building a strong and broad movement worldwide that is committed to eliminating shock devices from the supply and demand chain. “It is the belief of the No Shock Coalition that pets have an intrinsic right to be treated humanely, to have each of their individual needs met, and to live in a safe, enriched environment free from force, pain, punishment and fear,” said Tudge to resounding applause. 10

Tudge then introduced Dr. Karen Overall, who proceeded to deliver her presentation, Current Trends: Beyond dominance and discipline with characteristic passion and aplomb. Overall commenced by explaining that she had had an “epiphany” regarding how “insidious” dominance theory is in the field of dog training and behavior. “Dominance theory has shut off scientific research and has crept into medicine to the point where we think we can do things to animals whereby we are asking them to ‘submit’,” she said. “[At the vet’s office] we put them on a table even though they don’t want to be put on a table. And why would we teach a dog to heel? That’s just about control. It’s not a natural behavior. In pop psychology, dominance theory is insidious and has crept into everything we do with dogs and it’s wrong. It has gotten in the way of modern science and I’ve just about had it. Every single thing we do with dogs hurts them because we don’t see them as individuals or cognitive partners. We always test cognition by asking dogs to speak our language. We add this extra hurdle.” Overall explained that, according to Hare et al., dogs differ from both chimps and hand-reared wolves in their ability to act on signals from humans that indicate where food or objects are hidden, and that dogs respond like humans, demonstrating similar cognitive processes.1 “In addition, dogs have the ability to make cognitive associations via fast mapping,”2 Overall said. Overall stated that her take home message was to be cautious about how we label behaviors because, while labels do not structure social relationships, they can do damage. “The words you choose may not reflect either the behavior or its meaning, and may not be defined the same way by others,” she said. “Describe behaviors: in ethology and in veterinary behavioral medicine, behaviors ARE the data. Unfortunately, the dominance, discipline and coercion approach has affected every aspect of how we interact with dogs from basic training to treating troubled dogs. We MUST abandon these cruel, scientifically unsupported labels and approaches and replace them with a hu-

BARKS from the Guild January 2017