BARKS from the Guild Spring 2014 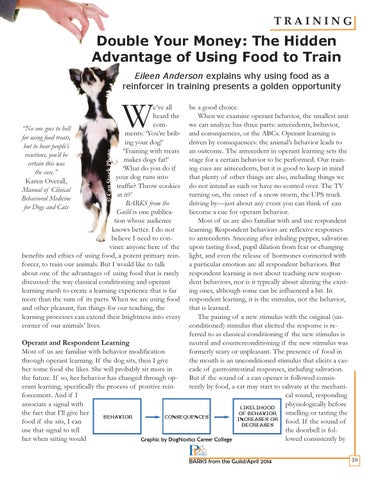 Double Your Money: The Hidden Advantage of Using Food to Train

e’ve all heard the com“No one goes to hell ments: ‘You’re bribfor using food treats, ing your dog!’ but to hear people’s ‘Training with treats reactions, you’d be makes dogs fat!’ certain this was ‘What do you do if the case.” your dog runs into Karen Overall, traffic? Throw cookies Manual of Clinical at it?’ Behavioral Medicine BARKS from the for Dogs and Cats Guild is one publication whose audience knows better. I do not believe I need to convince anyone here of the benefits and ethics of using food, a potent primary reinforcer, to train our animals. But I would like to talk about one of the advantages of using food that is rarely discussed: the way classical conditioning and operant learning mesh to create a learning experience that is far more than the sum of its parts. When we are using food and other pleasant, fun things for our teaching, the learning processes can extend their brightness into every corner of our animals’ lives. © Can Stock Photo

be a good choice. When we examine operant behavior, the smallest unit we can analyze has three parts: antecedents, behavior, and consequences, or the ABCs. Operant learning is driven by consequences: the animal’s behavior leads to an outcome. The antecedent in operant learning sets the stage for a certain behavior to be performed. Our training cues are antecedents, but it is good to keep in mind that plenty of other things are also, including things we do not intend as such or have no control over. The TV turning on, the onset of a snow storm, the UPS truck driving by—just about any event you can think of can become a cue for operant behavior. Most of us are also familiar with and use respondent learning. Respondent behaviors are reflexive responses to antecedents. Sneezing after inhaling pepper, salivation upon tasting food, pupil dilation from fear or changing light, and even the release of hormones connected with a particular emotion are all respondent behaviors. But respondent learning is not about teaching new respondent behaviors, nor is it typically about altering the existing ones, although some can be influenced a bit. In respondent learning, it is the stimulus, not the behavior, that is learned. The pairing of a new stimulus with the original (unconditioned) stimulus that elicited the response is referred to as classical conditioning if the new stimulus is Operant and Respondent Learning neutral and counterconditioning if the new stimulus was Most of us are familiar with behavior modification formerly scary or unpleasant. The presence of food in through operant learning. If the dog sits, then I give the mouth is an unconditioned stimulus that elicits a casher some food she likes. She will probably sit more in cade of gastrointestinal responses, including salivation. the future. If so, her behavior has changed through opBut if the sound of a can opener is followed consiserant learning, specifically the process of positive reintently by food, a cat may start to salivate at the mechaniforcement. And if I cal sound, responding physiologically before associate a signal with LIKELIHOOD smelling or tasting the the fact that I’ll give her OF BEHAVIOR CONSEQUENCES BEHAVIOR INCREASES OR food. If the sound of food if she sits, I can DECREASES the doorbell is foluse that signal to tell lowed consistently by her when sitting would Graphic by DogNostics Career College BARKS from the Guild/April 2014

BARKS from the Guild Spring 2014

Published quarterly and edited by Susan Nilson, "BARKS from the Guild" presents a collection of valuable business and technical articles as well as reviews and news stories pertinent to our industry. BARKS is the official publication of the Pet Professional Guild and is distributed free to all members.