BARKS from the Guild March 2016 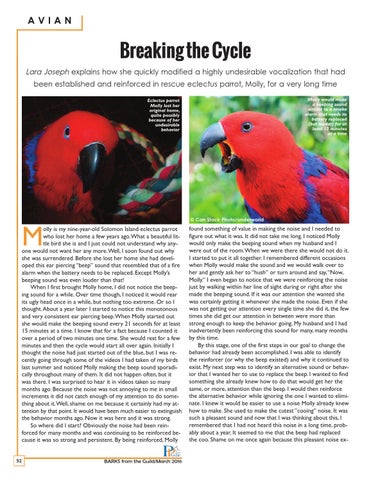 Lara Joseph explains how she quickly modified a highly undesirable vocalization that had been established and reinforced in rescue eclectus parrot, Molly, for a very long time

Eclectus parrot Molly lost her original home, quite possibly because of her undesirable behavior

olly is my nine-year-old Solomon Island eclectus parrot who lost her home a few years ago. What a beautiful little bird she is and I just could not understand why anyone would not want her any more. Well, I soon found out why she was surrendered. Before she lost her home she had developed this ear piercing “beep” sound that resembled that of a fire alarm when the battery needs to be replaced. Except Molly’s beeping sound was even louder than that! When I first brought Molly home, I did not notice the beeping sound for a while. Over time though, I noticed it would rear its ugly head once in a while, but nothing too extreme. Or so I thought. About a year later I started to notice this monotonous and very consistent ear piercing beep. When Molly started out she would make the beeping sound every 21 seconds for at least 15 minutes at a time. I know that for a fact because I counted it over a period of two minutes one time. She would rest for a few minutes and then the cycle would start all over again. Initially I thought the noise had just started out of the blue, but I was recently going through some of the videos I had taken of my birds last summer and noticed Molly making the beep sound sporadically throughout many of them. It did not happen often, but it was there. I was surprised to hear it in videos taken so many months ago. Because the noise was not annoying to me in small increments it did not catch enough of my attention to do something about it. Well, shame on me because it certainly had my attention by that point. It would have been much easier to extinguish the behavior months ago. Now it was here and it was strong. So where did I start? Obviously the noise had been reinforced for many months and was continuing to be reinforced because it was so strong and persistent. By being reinforced, Molly 52

found something of value in making the noise and I needed to figure out what it was. It did not take me long. I noticed Molly would only make the beeping sound when my husband and I were out of the room. When we were there she would not do it. I started to put it all together. I remembered different occasions when Molly would make the sound and we would walk over to her and gently ask her to “hush” or turn around and say, “Now, Molly.” I even began to notice that we were reinforcing the noise just by walking within her line of sight during or right after she made the beeping sound. If it was our attention she wanted she was certainly getting it whenever she made the noise. Even if she was not getting our attention every single time she did it, the few times she did get our attention in between were more than strong enough to keep the behavior going. My husband and I had inadvertently been reinforcing this sound for many, many months by this time. By this stage, one of the first steps in our goal to change the behavior had already been accomplished. I was able to identify the reinforcer (or why the beep existed) and why it continued to exist. My next step was to identify an alternative sound or behavior that I wanted her to use to replace the beep. I wanted to find something she already knew how to do that would get her the same, or more, attention than the beep. I would then reinforce the alternative behavior while ignoring the one I wanted to eliminate. I knew it would be easier to use a noise Molly already knew how to make. She used to make the cutest “cooing” noise. It was such a pleasant sound and now that I was thinking about this, I remembered that I had not heard this noise in a long time, probably about a year. It seemed to me that the beep had replaced the coo. Shame on me once again because this pleasant noise ex-

BARKS from the Guild March 2016