BARKS from the Guild January 2016 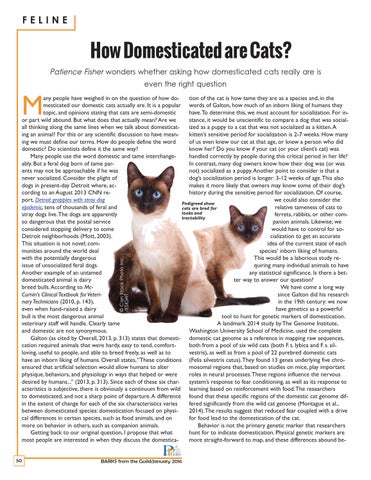 How Domesticated are Cats?

any people have weighed in on the question of how dotion of the cat is how tame they are as a species and, in the mesticated our domestic cats actually are. It is a popular words of Galton, how much of an inborn liking of humans they topic, and opinions stating that cats are semi-domestic have. To determine this, we must account for socialization. For inor part wild abound. But what does that actually mean? Are we stance, it would be unscientific to compare a dog that was socialall thinking along the same lines when we talk about domesticatized as a puppy to a cat that was not socialized as a kitten. A ing an animal? For this or any scientific discussion to have meankitten’s sensitive period for socialization is 2-7 weeks. How many ing we must define our terms. How do people define the word of us even knew our cat at that age, or knew a person who did domestic? Do scientists define it the same way? know her? Do you know if your cat (or your client’s cat) was Many people use the word domestic and tame interchangehandled correctly by people during this critical period in her life? ably. But a feral dog born of tame parIn contrast, many dog owners know how their dog was (or was ents may not be approachable if he was not) socialized as a puppy. Another point to consider is that a never socialized. Consider the plight of dog’s socialization period is longer: 3-12 weeks of age. This also dogs in present-day Detroit where, acmakes it more likely that owners may know some of their dog’s cording to an August 2013 CNN rehistory during the sensitive period for socialization. Of course, port, Detroit grapples with stray dog we could also consider the Pedigreed show relative tameness of cats to epidemic, tens of thousands of feral and cats are bred for looks and ferrets, rabbits, or other comstray dogs live. The dogs are apparently tractability panion animals. Likewise, we so dangerous that the postal service would have to control for soconsidered stopping delivery to some cialization to get an accurate Detroit neighborhoods (Mott, 2003). idea of the current state of each This situation is not novel; comspecies’ inborn liking of humans. munities around the world deal This would be a laborious study rewith the potentially dangerous quiring many individual animals to have issue of unsocialized feral dogs. any statistical significance. Is there a betAnother example of an untamed ter way to answer our question? domesticated animal is dairy We have come a long way breed bulls. According to Mcsince Galton did his research Curnin’s Clinical Textbook for Veteriin the 19th century: we now nary Technicians (2010, p. 143), have genetics as a powerful even when hand-raised a dairy tool to hunt for genetic markers of domestication. bull is the most dangerous animal A landmark 2014 study by The Genome Institute, veterinary staff will handle. Clearly tame Washington University School of Medicine, used the complete and domestic are not synonymous. Galton (as cited by Overall, 2013, p. 313) states that domesti- domestic cat genome as a reference in mapping raw sequences, both from a pool of six wild cats (both F. s. lybica and F. s. silcation required animals that were hardy, easy to tend, comfortvestris), as well as from a pool of 22 purebred domestic cats loving, useful to people, and able to breed freely, as well as to have an inborn liking of humans. Overall states, “These conditions (Felis silvestris catus). They found 13 genes underlying five chromosomal regions that, based on studies on mice, play important ensured that artificial selection would allow humans to alter roles in neural processes. These regions influence the nervous physique, behaviors, and physiology in ways that helped or were system’s response to fear conditioning, as well as its response to desired by humans...” (2013, p. 313). Since each of these six characteristics is subjective, there is obviously a continuum from wild learning based on reinforcement with food. The researchers to domesticated, and not a sharp point of departure. A difference found that these specific regions of the domestic cat genome differed significantly from the wild cat genome (Montague et al., in the extent of change for each of the six characteristics varies 2014). The results suggest that reduced fear coupled with a drive between domesticated species: domestication focused on physifor food lead to the domestication of the cat. cal differences in certain species, such as food animals, and on Behavior is not the primary genetic marker that researchers more on behavior in others, such as companion animals. hunt for to indicate domestication. Physical genetic markers are Getting back to our original question, I propose that what more straight-forward to map, and these differences abound bemost people are interested in when they discuss the domestica50

BARKS from the Guild January 2016