BARKS from the Guild Summer 2014 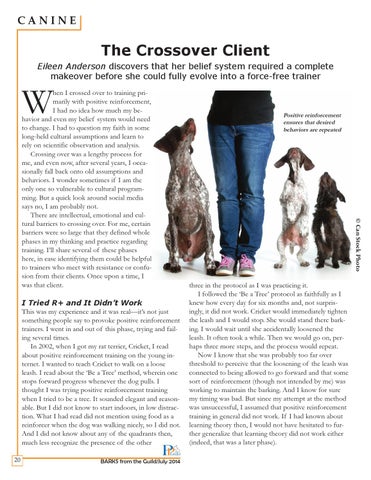 I Tried R+ and It Didn’t Work This was my experience and it was real—it’s not just something people say to provoke positive reinforcement trainers. I went in and out of this phase, trying and failing several times. In 2002, when I got my rat terrier, Cricket, I read about positive reinforcement training on the young internet. I wanted to teach Cricket to walk on a loose leash. I read about the ‘Be a Tree’ method, wherein one stops forward progress whenever the dog pulls. I thought I was trying positive reinforcement training when I tried to be a tree. It sounded elegant and reasonable. But I did not know to start indoors, in low distraction. What I had read did not mention using food as a reinforcer when the dog was walking nicely, so I did not. And I did not know about any of the quadrants then, much less recognize the presence of the other BARKS from the Guild/July 2014

hen I crossed over to training primarily with positive reinforcement, I had no idea how much my behavior and even my belief system would need to change. I had to question my faith in some long-held cultural assumptions and learn to rely on scientific observation and analysis. Crossing over was a lengthy process for me, and even now, after several years, I occasionally fall back onto old assumptions and behaviors. I wonder sometimes if I am the only one so vulnerable to cultural programming. But a quick look around social media says no, I am probably not. There are intellectual, emotional and cultural barriers to crossing over. For me, certain barriers were so large that they defined whole phases in my thinking and practice regarding training. I’ll share several of these phases here, in case identifying them could be helpful to trainers who meet with resistance or confusion from their clients. Once upon a time, I was that client.

three in the protocol as I was practicing it. I followed the ‘Be a Tree’ protocol as faithfully as I knew how every day for six months and, not surprisingly, it did not work. Cricket would immediately tighten the leash and I would stop. She would stand there barking. I would wait until she accidentally loosened the leash. It often took a while. Then we would go on, perhaps three more steps, and the process would repeat. Now I know that she was probably too far over threshold to perceive that the loosening of the leash was connected to being allowed to go forward and that some sort of reinforcement (though not intended by me) was working to maintain the barking. And I know for sure my timing was bad. But since my attempt at the method was unsuccessful, I assumed that positive reinforcement training in general did not work. If I had known about learning theory then, I would not have hesitated to further generalize that learning theory did not work either (indeed, that was a later phase).

BARKS from the Guild Summer 2014

Your BARKS summer edition. The quarterly publication from The Pet Professional Guild