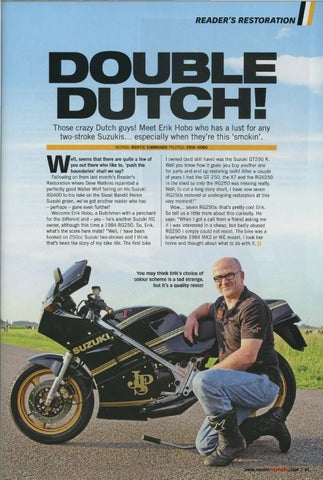 Those crazy Dutch guys! Meet Erik Hobo who has a lust for any two-stroke Suzukis ... especially when they're this 'smokin'. WORDS: BERTIE SIMMONDS PHOTOS: ERIK HOBO

ell, seems that there are quite a few of you out there who like to, 'push the boundaries' shall we say?

Following on from last month's Reader's Restoration where Dave Watkins repainted a perfectly good Walter Wolf fairing on his Suzuki RG400 to his take on the Skoal Bandit Heron Suzuki green , we've got another reader who has - perhaps - gone even further! Welcome Erik Hobo, a Dutchman with a penchant for the different and -yes - he's another Suzuki RG owner, although this time a 1984 RG250. So, Erik, what's the score here mate? "Well , I have been hooked on 250cc Suzuki two-strokes and I think that's been the story of my bike life. The first bike

I owned (and still have) was the Suzuki GT250 K. Well you know how it goes: you buy another one for parts and end up restoring both! After a couple of years I had the GT 250, the X7 and the RGV250 in the shed so only the RG250 was missing really. Well, to cut a long story short, I have now seven RG250s restored or undergoing restoration at this very moment!" Wow ... seven RG250s: that's pretty cool Erik. So tell us a little more about this curiosity. He says: "When I got a call from a friend asking me if I was interested in a cheap, but badly abused RG250 I simply could not resist. The bike was a blue/white 1984 MK2 or WE model. I took her home and thought about what to do with it.

You may think Erik's choice of colour scheme is a tad strange, but it's a quality resto!

>I realised that I could simply restore it back to its

As found, she was a right mess!

former glory using the new old stock fairing panels and tank from the attic that I have stashed away for a rainy day, but instead I decided that I wanted to do something different for a change." Firstly, look at the state of the bike Erik took home: panels missing, dirt everywhere, chain and sprockets not just tired, but instead a long-time dead. This wasn't just going to be a quick spruce up, so it was little wonder that Erik felt the need to do something a bit different. And this is that 'something different for a change': Erik's 1984 RG250 John Player Special replica. Now, again purists may howl, but look at how beautiful the bike is. Few combinations look better than black and gold- think of all the bikes and cars in such colours that have gone before, either with or without the fag packet branding. Yes, as a non-smoker- 'don't do it kids'- you might baulk but then you can't help thinking where would we be without cool John Player Specialbacked Lotus Fl cars, or JPS-backed Norton racers? Erik is in agreement and the inspiration for the way the scheme worked came from another fag-packet design- this time one much more readily associated with Suzuki's racers and race replicas. "I guess I've always liked the black and gold colour combination and when you combine that with tobacco and tobacco advertising you will end up using John Player Special logos." He adds: "Together with my friend Ton, we decided to stay as

READER'S RESTORATION close as possible to the design Suzuki used on the RG250 MK2 HB-backed replica. That was no surprise as that bike is in the shed also!" So, pal Ton made the decals and the parts got painted in black with the tank decals under a clear top coat. Erik says: "To make it a bit more special I used the wheels and front-end from the rare RG250 MK4, which has bigger discs and uses a 17in rear wheel. I also had several details especially made -the front fender bracket has the JPS logo in it and the clock bracket got extra room for a volt-meter to go with the aftermarket temperature gauge." Other modifications went a little further. Erik explains: "I figured it would be worth a try getting a hydraulic clutch conversion on the RG250. After taking measurements the clutch slave cylinder from a Vitara jeep (of course it had to be a Suzuki) was almost a straight fit and it works just fine!" To keep the bike looking that little bit extra special, Erik managed to get some new old stock DEPP end cans from over here in dear old Blighty. So what do you think? We love it. It looks pseudo-factory, which is the way Erik wanted it to be. The use of Ton's decals instead of painstakingly painting the graphics give it a manufactured feel compared to a 'one-off'. But, Erik, what does she ride like, mate? He says: "Well, it rides the same as any well-maintained RG250 I would say but with better brakes (you should know, having seven of them, Erik .. .) and I am pleased with the result!" cmm

Do you have any weird and wonderful creations that you've built? Let Bertie know at BSimmonds@Mortons.co.uk. 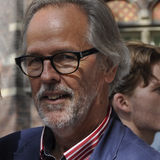