She stood there a Loaded Gun - Peter Truschner 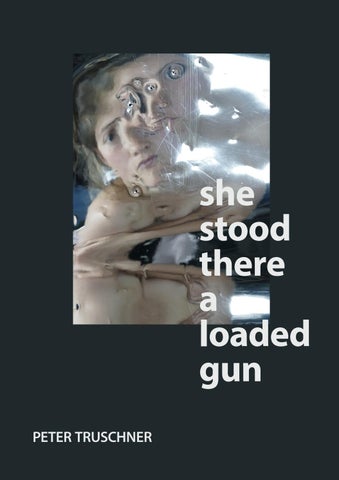 Alone, I cannot be

To find the Sunrise left I dwell in Possibility

A fairer House than Prose I tie my Hat

I hav‘nt told my garden yet Lest that should conquer me. I hav‘nt quite the strength now To break it to the Bee I will not name it in the street For shops would stare at me That one so shy – so ignorant should have the face to die The worm doth woo the mortal, death claims a living bride I see thee better – in the Dark I do not need a Light If I should die And you should live It&#39;s sweet to know that stocks will stand when we with Daisies lie

I felt my life

with both my hands I turned my Being round and round

I think just how my shape will rise Till Hair – and Eyes – and timid Head Are out of sight I‘m “wife” – I‘ve finished that That other state I‘m Czar – I‘m “woman” now It‘s safer so How odd the Girl‘s life looks behind this oft eclipse The Day that I was crowned Was like the other days Until the Coronation came I rose, and all was plain

My Fortress I do not doubt

The Self I was

of Life I paid an existence market price

The soul has moments of escape When bursting all the doors She dances like a Bomb, abroad And swings upon the Hours 56

I reason, Earth is short And Anguish – absolute To put this World down, like a Bundle And walk steady away Requires Energy – possibly Agony But, what of that?

To learn the Transport by the Pain As Blind Men learn the sun. To stay with homesick feet Upon a foreign shore Haunted by native lands, the white And blue – beloved Air!

Dare you see a Soul at &quot;White Heat&quot;?

There is a certain Slant of Light Shadows hold their Breath

each little discord here removed When I count the seeds That are sown beneath To bloom so, bye and bye

When I believe in the garden Mortal shall not see

I started Early – took my dog And visited the Sea The Mermaids in the Basement Came out to look at me The Tide went past my simple Shoe And past my Apron – and my Belt And past my Boddice – too And made as it would eat me up When they dislocate my brain! Amputate my freckled Bosom! Make me bearded like a man! Blush, my spirit in thy Fastness Blush, my unacknowledged clay I walked – as wings – my body bore The feet – I former used Unnecessary now to me As boots – would be to birds I never felt at Home – below And in the Handsome skies I shall not feel at Home – I know I don‘t like Paradise

The Memory of my Ashes Will consolation be

She dropped as softly as a star from out my summer&#39;s eve

ABOUT THE TEXT The text of this book is an unique stream built out of disjunctive text lines extracted by Peter Truschner from the collected poems of Emily Dickinson. THANKS TO Luise Truschner, Hermann Beil, Mario Jandrokovic, Brigitta Lienbacher, Stefan Gmünder, Petra und Christian von Hoffen, Stephan Kruhl, Suzy Royal, Carlos Iglesias, Hannes Wanderer, Reinhard Kressner BIO Peter Truschner, born 1967, is an Austrian photographer and writer who has been living in Berlin since 1999. He received several awards and scholarships. His novel Die Träumer (The Dreamers) was nominated for National Book Award “Deutscher Buchpreis” in 2007. His plays have been performed in major theatres in Germany. Since 2010 he has been working as a freelance lecturer at universities, e. g. Universität der Künste Berlin. His first photo book Bangkok Struggle was published by Peperoni Books in 2015 and reached top 5 at “Photo Eye” in Santa Fé/New Mexico. In 2016 he had his first solo exhibition in the Museum of Modern Art, Klagenfurt/Austria.

She stood there a Loaded Gun - Peter Truschner