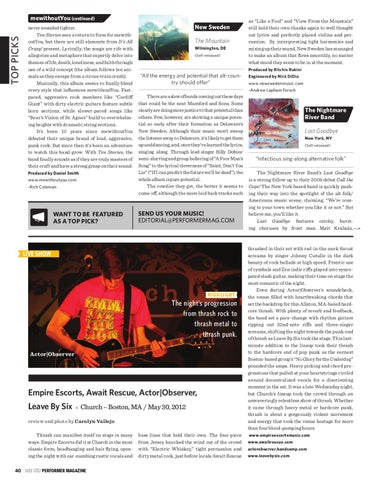 mewithoutYou (continued) never sounded tighter. Ten Stories sees a return to form for mewithoutYou, but there are still elements from It’s All Crazy! present. Lyrically, the songs are rife with allegories and metaphors that expertly delve into themes of life, death, loneliness, and faith through use of a wild concept (the album follows ten animals as they escape from a circus-train crash). Musically, this album seems to finally blend every style that influences mewithoutYou. Fastpaced, aggressive rock numbers like “Cardiff Giant” with dirty electric guitars feature subtle horn sections, while slower-paced songs like “Bear’s Vision of St. Agnes” build to overwhelming heights with dramatic string sections. It’s been 10 years since mewithoutYou debuted their unique brand of loud, aggressive, punk rock. But since then it’s been an adventure to watch this band grow. With Ten Stories, the band finally sounds as if they are truly masters of their craft and have a strong grasp on their sound. Produced by Daniel Smith www.mewithoutyou.com -Rich Coleman

WANT TO BE FEATURED AS A TOP PICK?

“All the energy and potential that alt-country should offer”

SEND US YOUR MUSIC! EDITORIAL@PERFORMERMAG.COM

The night’s progression from thrash rock to thrash metal to thrash punk. Actor|Observer

review and photo by Carolyn Vallejo Thrash can manifest itself on stage in many ways. Empire Escorts did it at Church in the most classic form, headbanging and hair flying, opening the night with ear-numbing rustic vocals and 40 JULY 2012 PERFORMER MAGAZINE

There are a slew of bands coming out these days that could be the next Mumford and Sons. Some clearly are doing more justice to that potential than others. Few, however, are showing a unique potential so early after their formation as Delaware’s New Sweden. Although their music won’t sweep the listener away to Delaware, it’s likely to get them up and dancing, and, once they’ve learned the lyrics, singing along. Through lead-singer Billy Dobies’ semi-slurring and group hollering of “A Poor Man’s Song” to the lyrical cleverness of “Saint, Don’t You Lie” (“If I can predict the future we’ll be dead”), the whole album is pure potential. The rowdier they get, the better it seems to come off, although the more laid back tracks such

as “Like a Fool” and “View From the Mountain” still hold their own thanks again to well thought out lyrics and perfectly placed violins and percussion. By incorporating tight harmonies and mixing up their sound, New Sweden has managed to make an album that flows smoothly, no matter what mood they seem to be in at the moment.

bass lines that held their own. The four-piece from Jersey knocked the wind out of the crowd with “Electric Whiskey,” tight percussion and dirty metal rock, just before locals Await Rescue

“Infectious sing-along alternative folk” The Nightmare River Band’s Last Goodbye is a strong follow up to their 2009 debut Call the Cops! The New York based band is quickly pushing their way into the spotlight of the alt-folk/ Americana music scene, claiming, “We’re coming to your town whether you like it or not.” But believe me, you’ll like it. Last Goodbye features catchy, bursting choruses by front man Matt Krahula,

thrashed in their set with red-in-the-neck throat screams by singer Johnny Cutulle in the dark beauty of rock ballads at high speed. Frantic use of cymbals and Zen indie riffs played into syncopated slash guitar, making their time on stage the most romantic of the night. Even during Actor|Observer’s soundcheck, the venue filled with heartbreaking chords that set the backdrop for this Allston, MA-based hardcore thrash. With plenty of reverb and feedback, the band set a pace-change with rhythm guitars ripping out 32nd-note riffs and three-singer screams, shifting the night towards the punk-end of thrash as Leave By Six took the stage. This lastminute addition to the lineup took their thrash to the hardcore end of pop punk as the earnest Boston-based group’s “No Glory for the Underdog” pounded the amps. Heavy picking and chord progressions that pulled at your heartstrings circled around decentralized vocals for a disorienting moment in the set. It was a late Wednesday night, but Church’s lineup took the crowd through an unwaveringly relentless show of thrash. Whether it came through heavy metal or hardcore punk, thrash is about s gorgeously violent movement and energy that took the venue hostage for more than four blood-pumping hours. www.empireescortsmusic.com www.awaitrescue.com actorobserver.bandcamp.com www.leavebysix.com