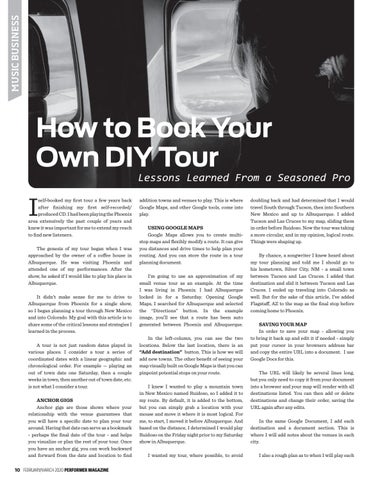 How to Book Your Own DIY Tour

Lessons Learned From a Seasoned Pro

self-booked my first tour a few years back after finishing my first self-recorded/ produced CD. I had been playing the Phoenix area extensively the past couple of years and knew it was important for me to extend my reach to find new listeners. The genesis of my tour began when I was approached by the owner of a coffee house in Albuquerque. He was visiting Phoenix and attended one of my performances. After the show, he asked if I would like to play his place in Albuquerque. It didn’t make sense for me to drive to Albuquerque from Phoenix for a single show, so I began planning a tour through New Mexico and into Colorado. My goal with this article is to share some of the critical lessons and strategies I learned in the process. A tour is not just random dates played in various places. I consider a tour a series of coordinated dates with a linear geographic and chronological order. For example -- playing an out of town date one Saturday, then a couple weeks in town, then another out of town date, etc. is not what I consider a tour. ANCHOR GIGS Anchor gigs are those shows where your relationship with the venue guarantees that you will have a specific date to plan your tour around. Having that date can serve as a bookmark - perhaps the final date of the tour - and helps you visualize or plan the rest of your tour. Once you have an anchor gig, you can work backward and forward from the date and location to find

addition towns and venues to play. This is where Google Maps, and other Google tools, come into play. USING GOOGLE MAPS Google Maps allows you to create multistop maps and flexibly modify a route. It can give you distances and drive times to help plan your routing. And you can store the route in a tour planning document. I’m going to use an approximation of my small venue tour as an example. At the time I was living in Phoenix. I had Albuquerque locked in for a Saturday. Opening Google Maps, I searched for Albuquerque and selected the “Directions” button. In the example image, you’ll see that a route has been auto generated between Phoenix and Albuquerque. In the left-column, you can see the two locations. Below the last location, there is an​ “Add destination” ​button. This is how we will add new towns. The other benefit of seeing your map visually built on Google Maps is that you can pinpoint potential stops on your route. I knew I wanted to play a mountain town in New Mexico named Ruidoso, so I added it to my route. By default, it is added to the bottom, but you can simply grab a location with your mouse and move it where it is most logical. For me, to start, I moved it before Albuquerque. And based on the distance, I determined I would play Ruidoso on the Friday night prior to my Saturday show in Albuquerque. I wanted my tour, where possible, to avoid

doubling back and had determined that I would travel South through Tucson, then into Southern New Mexico and up to Albuquerque. I added Tucson and Las Cruces to my map, sliding them in order before Ruidoso. Now the tour was taking a more circular, and in my opinion, logical route. Things were shaping up. By chance, a songwriter I knew heard about my tour planning and told me I should go to his hometown, Silver City, NM - a small town between Tucson and Las Cruces. I added that destination and slid it between Tucson and Las Cruces. I ended up traveling into Colorado as well. But for the sake of this article, I’ve added Flagstaff, AZ to the map as the final stop before coming home to Phoenix. SAVING YOUR MAP In order to save your map - allowing you to bring it back up and edit it if needed - simply put your cursor in your browsers address bar and copy the entire URL into a document. I use Google Docs for this. The URL will likely be several lines long, but you only need to copy it from your document into a browser and your map will render with all destinations listed. You can then add or delete destinations and change their order, saving the URL again after any edits. In the same Google Document, I add each destination and a document section. This is where I will add notes about the venues in each city. I also a rough plan as to when I will play each