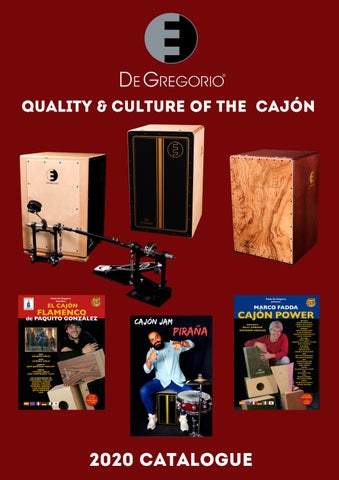 Yaquí A classic of the DG catalogue, Yaquí has set a standard on the cajón market, with its perfectly balanced sound. This is an all-around model that can be used in any musical genre. Fast response, crisp sharp and fat bass tone with a captivating look, Yaquí has got everything you may ask from a professional snare cajón. 3

Chanela Chanela is the result of years of research and work towards an instrument with extraordinarily sensitive snare response while maintaining the rich sound for which DG is known. This cajรณn includes a specially designed snare mechanism which doubles the number of strings from the standard 4 to up to 8, resulting in stunning sensitivity, and the 2.5 mm front-plate is constructed of 5 ultra-thin plies of Baltic birch for unparalleled tone. 4

After many years of close collaboration with the worldsâ&amp;#x20AC;&amp;#x2122; top cajoneros, we developed a special instrument which delivers an impressive result: Tokayo is the model that satisfies those who look for a powerful sound, as well as those who need extreme sensitivity in the response. Volume, tone, precision, the Tokayo has got it all. The ultimate cajĂłn, now with two brand new finishes,Â Morisco and Stripe, is bound to set a new standard for the modern player. 5

DrumBox Plus Applying Power Size to the DrumBox seemed the logical developement in order to achieve a deeper and stronger bass tone, one that could actually match that of a bass drum. Now many drumkit players have the option to replace their bass drum, save space on the stage, eliminate a drum stool, and most of all, play a great sounding cajón. This model also features a simple yet innovative pedal clamp, that holds itself directly onto heavy duty rubber feet, eliminating the stress on the cajón coming from pedal action. 6

Cajón Pedal Unlike cable-driven pedals which can feel slow and lack finesse, the DG Cajón Pedal uses a telescoping linkage to join the remote-pedal to the beater assembly, resulting in no loss of energy and a lightning-fast feel. Add to that our specially designed foam-rubber beater, and you have the first pedal to truly allow you to play your cajón like a bass drum. This pedal can be used to hit either the side or the front of the cajón, therefore it can be used in four different ways: for a right footed player, either on the side or the front, just as well as for a left footed player. 7

Cajón riser The need to raise the height of the seat can become an important issue for drummers when they play with a pedal, because the ideal leg angle is not the same for everyone. This simple yet effective device is designed especially as an accessory for the DrumBox Plus, and its scope is to rise the height of the cajón by a minimum of 3 to a maximum of 9 cms, according to the model (A - B - C). The structure of the riser is fix and it features four allocation holes for the heavy duty rubber feet that presents the DrumBox Plus. Solid and reliable, also available in black stain.

Siroco Plus takes the collapsible cajón to a new level: new Power sizes and an improved internal design have increased both resonance and bass tone of this cajon, making it just as good as a non collapsible standard cajón. When dismounted, the Siroco measures 12x32x50 cms, only onethird of its mounted size, and can easily be placed in an airplane carry-on rack or under a seat. Take it wherever you go and rely on a great performing cajón! 9

De Luxe The “De Luxe” edition enhances the standard of the professional models Chanela, Yaquí and Kanyero. The main added value is the material used for the body of the cajons, which is solid wood (a variety of Mahogany known as Sipo), and it is built with state of the art, digitally controlled machinery. Thanks to this technology, the solid wood panels are thinned and profiled in such a way that they are both lightweight and rock solid. The inner joints of the De Luxe models are specially contoured in order to eliminate the 90 degrees angle; this gives a mellower tone, more “rounded”. The warmer tone is also achieved because the width of the De Luxe version is bigger than the standard models. The beautiful look of solid wood adds up to its tonal qualities, creating a product that is very hard to improve. Now widening the choice with the new dark stained Spirit and Fénix De Luxe. 10

Mini Cajón Made with the same material of a professional cajón, and featuring a fixed snare system, this miniature instrument was originally conceived as a gadget or a souvenir, but it turned out to be a mini cajón that can be effectively used to play as a sort of “bongo cajón”. It can be held between the legs and played with fingers,so that the technique for bongo, tabla, or frame drums can be effectively used. Ideal for informal music jams between friends. 15

Culture of the cajón The main source of motivation behind our work, is true passion and love for this instrument. Coming from a musical background, we focused our interest on the music scenes that gave birth to the cajón. We were fortunate to establish close links with some of the best professional cajón players, and while we got precious first hand information that helped improving our instruments, we always strived to spread this knowledge as much as possible. To homage the history and the state of the art of this instrument, we produced a documentary, two tuitional dvds and a record, which feature many performances by world class musicians. These works have been reviewed very positively all over the world, and in some cases were even awarded, so we believe that they give a great added value to our products. 16

The Ways of the Cajรณn An on-the-road musical documentary consisting in previously unreleased live performances from the masters of Afro-Peruvian, Flamenco, Afro-Cuban traditions, as well as a selection of artists from the rest of the world. 17

Cajรณn Power Cajรณn Power is a real encyclopaedia, where Marco Fadda plays and explains both traditional and modern rhythms, with the aid of 34 world-class musicians, among them Billy Cobham, Joey De Francesco and Giovanni Hidalgo. Nearly four hours of precious information. 19

Cajón Jam Cajón Jam, is the ultimate method featuring the world&#39;s greates player, the legendary Israel Suárez &quot;Piraña&quot;. The first tuitional work by the cajón genius had to be produced by DG, completing the best learning material available. Eighty pages book, and one hour of amazing video contents. 20

A manual of twenty pages, excerpt from Cajón Jam, is the new added value that we include with every cajón. This way we give every customer the chance to learn the basics with the best player in the world. 21

&quot;23&quot; by Manu Masaedo We are proud to introduce as executive producers and record label, the first record by Manu Masaedo, a young and brilliant musician, one of the best cajón players in the world nowadays, who also happens to compose, sing and play guitar. Special features by artists such as Alain Pérez on bass, Dani de Morón and Rycardo Moreno on solo guitars, Carlos Sarduy on trumpet, Nino de los Reyes on Flamenco zapateo dancing and Kike Terrón, who plays cajón on“Fuego en el 23”. 22