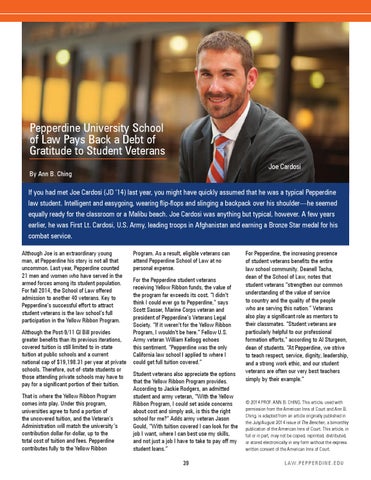 By Ann B. Ching

If you had met Joe Cardosi (JD ’14) last year, you might have quickly assumed that he was a typical Pepperdine law student. Intelligent and easygoing, wearing flip-flops and slinging a backpack over his shoulder—he seemed equally ready for the classroom or a Malibu beach. Joe Cardosi was anything but typical, however. A few years earlier, he was First Lt. Cardosi, U.S. Army, leading troops in Afghanistan and earning a Bronze Star medal for his combat service. Although Joe is an extraordinary young man, at Pepperdine his story is not all that uncommon. Last year, Pepperdine counted 21 men and women who have served in the armed forces among its student population. For fall 2014, the School of Law offered admission to another 40 veterans. Key to Pepperdine’s successful effort to attract student veterans is the law school’s full participation in the Yellow Ribbon Program. Although the Post-9/11 GI Bill provides greater benefits than its previous iterations, covered tuition is still limited to in-state tuition at public schools and a current national cap of $19,198.31 per year at private schools. Therefore, out-of-state students or those attending private schools may have to pay for a significant portion of their tuition. That is where the Yellow Ribbon Program comes into play. Under this program, universities agree to fund a portion of the uncovered tuition, and the Veteran’s Administration will match the university’s contribution dollar-for-dollar, up to the total cost of tuition and fees. Pepperdine contributes fully to the Yellow Ribbon

Program. As a result, eligible veterans can attend Pepperdine School of Law at no personal expense. For the Pepperdine student veterans receiving Yellow Ribbon funds, the value of the program far exceeds its cost. “I didn’t think I could ever go to Pepperdine,” says Scott Sasser, Marine Corps veteran and president of Pepperdine’s Veterans Legal Society. “If it weren’t for the Yellow Ribbon Program, I wouldn’t be here.” Fellow U.S. Army veteran William Kellogg echoes this sentiment. “Pepperdine was the only California law school I applied to where I could get full tuition covered.” Student veterans also appreciate the options that the Yellow Ribbon Program provides. According to Jackie Rodgers, an admitted student and army veteran, “With the Yellow Ribbon Program, I could set aside concerns about cost and simply ask, is this the right school for me?” Adds army veteran Jason Gould, “With tuition covered I can look for the job I want, where I can best use my skills, and not just a job I have to take to pay off my student loans.” 39

For Pepperdine, the increasing presence of student veterans benefits the entire law school community. Deanell Tacha, dean of the School of Law, notes that student veterans “strengthen our common understanding of the value of service to country and the quality of the people who are serving this nation.” Veterans also play a significant role as mentors to their classmates. “Student veterans are particularly helpful to our professional formation efforts,” according to Al Sturgeon, dean of students. “At Pepperdine, we strive to teach respect, service, dignity, leadership, and a strong work ethic, and our student veterans are often our very best teachers simply by their example.” 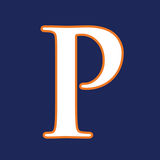 Pepperdine Law is the feature magazine of the School of Law, showcasing alumni and scholarship.

Pepperdine Law is the feature magazine of the School of Law, showcasing alumni and scholarship.