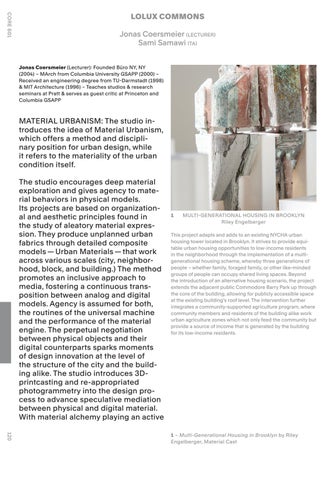 MATERIAL URBANISM: The studio introduces the idea of Material Urbanism, which offers a method and disciplinary position for urban design, while it refers to the materiality of the urban condition itself. The studio encourages deep material exploration and gives agency to material behaviors in physical models. Its projects are based on organizational and aesthetic principles found in the study of aleatory material expression. They produce unplanned urban fabrics through detailed composite models — Urban Materials — that work across various scales (city, neighborhood, block, and building.) The method promotes an inclusive approach to media, fostering a continuous transposition between analog and digital models. Agency is assumed for both, the routines of the universal machine and the performance of the material engine. The perpetual negotiation between physical objects and their digital counterparts sparks moments of design innovation at the level of the structure of the city and the building alike. The studio introduces 3Dprintcasting and re-appropriated photogrammetry into the design process to advance speculative mediation between physical and digital material. With material alchemy playing an active

This project adapts and adds to an existing NYCHA urban housing tower located in Brooklyn. It strives to provide equitable urban housing opportunities to low-income residents in the neighborhood through the implementation of a multigenerational housing scheme, whereby three generations of people – whether family, foraged family, or other like-minded groups of people can occupy shared living spaces. Beyond the introduction of an alternative housing scenario, the project extends the adjacent public Commodore Barry Park up through the core of the building, allowing for publicly accessible space at the existing building’s roof level. The intervention further integrates a community-supported agriculture program, where community members and residents of the building alike work urban agriculture zones which not only feed the community but provide a source of income that is generated by the building for its low-income residents.

Pressing Matters 10 is a publication from the Department of Architecture at the University of Pennsylvania Stuart Weitzman School of Design. It has been published annually since 2013. This volume features student work, events, and news from the 2020-2021 academic year. It was designed by WSDIA and published by ORO Editions. 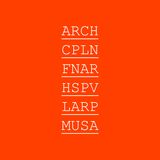