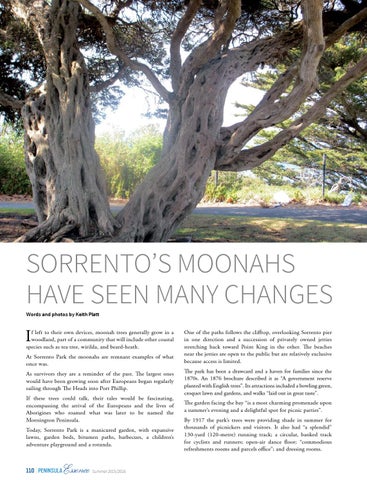 f left to their own devices, moonah trees generally grow in a woodland, part of a community that will include other coastal species such as tea tree, wirilda, and beard-heath.

At Sorrento Park the moonahs are remnant examples of what once was. As survivors they are a reminder of the past. The largest ones would have been growing soon after Europeans began regularly sailing through The Heads into Port Phillip. If these trees could talk, their tales would be fascinating, encompassing the arrival of the Europeans and the lives of Aborigines who roamed what was later to be named the Mornington Peninsula. Today, Sorrento Park is a manicured garden, with expansive lawns, garden beds, bitumen paths, barbecues, a children’s adventure playground and a rotunda.

One of the paths follows the clifftop, overlooking Sorrento pier in one direction and a succession of privately owned jetties stretching back toward Point King in the other. The beaches near the jetties are open to the public but are relatively exclusive because access is limited. The park has been a drawcard and a haven for families since the 1870s. An 1876 brochure described it as “A government reserve planted with English trees”. Its attractions included a bowling green, croquet lawn and gardens, and walks “laid out in great taste”. The garden facing the bay “is a most charming promenade upon a summer’s evening and a delightful spot for picnic parties”. By 1917 the park’s trees were providing shade in summer for thousands of picnickers and visitors. It also had “a splendid” 130-yard (120-metre) running track; a circular, banked track for cyclists and runners; open-air dance floor; “commodious refreshments rooms and parcels office”; and dressing rooms.