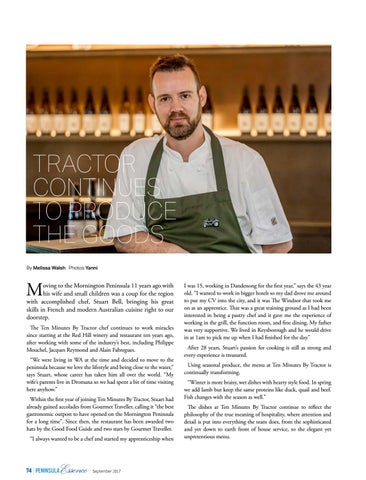 oving to the Mornington Peninsula 11 years ago with his wife and small children was a coup for the region with accomplished chef, Stuart Bell, bringing his great skills in French and modern Australian cuisine right to our doorstep.

The Ten Minutes By Tractor chef continues to work miracles since starting at the Red Hill winery and restaurant ten years ago, after working with some of the industry’s best, including Philippe Mouchel, Jacques Reymond and Alain Fabregues. “We were living in WA at the time and decided to move to the peninsula because we love the lifestyle and being close to the water,” says Stuart, whose career has taken him all over the world. “My wife’s parents live in Dromana so we had spent a bit of time visiting here anyhow.” Within the first year of joining Ten Minutes By Tractor, Stuart had already gained accolades from Gourmet Traveller, calling it “the best gastronomic outpost to have opened on the Mornington Peninsula for a long time”. Since then, the restaurant has been awarded two hats by the Good Food Guide and two stars by Gourmet Traveller. “I always wanted to be a chef and started my apprenticeship when

I was 15, working in Dandenong for the first year,” says the 43 year old. “I wanted to work in bigger hotels so my dad drove me around to put my CV into the city, and it was The Windsor that took me on as an apprentice. That was a great training ground as I had been interested in being a pastry chef and it gave me the experience of working in the grill, the function room, and fine dining. My father was very supportive. We lived in Keysborough and he would drive in at 1am to pick me up when I had finished for the day.” After 28 years, Stuart’s passion for cooking is still as strong and every experience is treasured. Using seasonal produce, the menu at Ten Minutes By Tractor is continually transforming. “Winter is more braisy, wet dishes with hearty style food. In spring we add lamb but keep the same proteins like duck, quail and beef. Fish changes with the season as well.” The dishes at Ten Minutes By Tractor continue to reflect the philosophy of the true meaning of hospitality, where attention and detail is put into everything the team does, from the sophisticated and yet down to earth front of house service, to the elegant yet unpretentious menu.