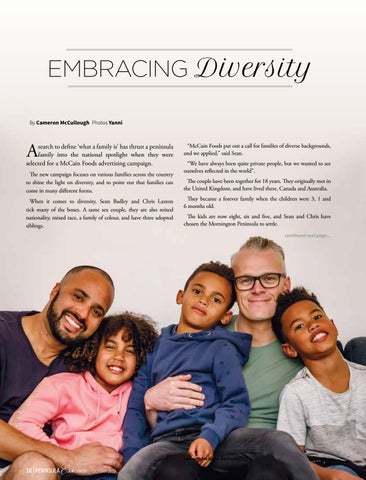 “McCain Foods put out a call for families of diverse backgrounds, and we applied,” said Sean.

The new campaign focuses on various families across the country to shine the light on diversity, and to point out that families can come in many different forms.

The couple have been together for 18 years. They originally met in the United Kingdom, and have lived there, Canada and Australia.

search to define ‘what a family is’ has thrust a peninsula family into the national spotlight when they were selected for a McCain Foods advertising campaign.

When it comes to diversity, Sean Badley and Chris Laxton tick many of the boxes. A same sex couple, they are also mixed nationality, mixed race, a family of colour, and have three adopted siblings.

“We have always been quite private people, but we wanted to see ourselves reflected in the world”.

They became a forever family when the children were 3, 1 and 6 months old. The kids are now eight, six and five, and Sean and Chris have chosen the Mornington Peninsula to settle. continued next page...

Lee with his band, Bedrock. October 2019