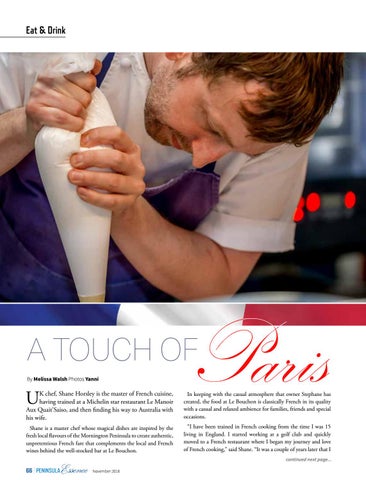 A TOUCH OF By Melissa Walsh Photos Yanni

K chef, Shane Horsley is the master of French cuisine, having trained at a Michelin star restaurant Le Manoir Aux Quait’Saiso, and then finding his way to Australia with his wife.

In keeping with the casual atmosphere that owner Stephane has created, the food at Le Bouchon is classically French in its quality with a casual and relaxed ambience for families, friends and special occasions.

Shane is a master chef whose magical dishes are inspired by the fresh local flavours of the Mornington Peninsula to create authentic, unpretentious French fare that complements the local and French wines behind the well-stocked bar at Le Bouchon.

“I have been trained in French cooking from the time I was 15 living in England. I started working at a golf club and quickly moved to a French restaurant where I began my journey and love of French cooking,” said Shane. “It was a couple of years later that I