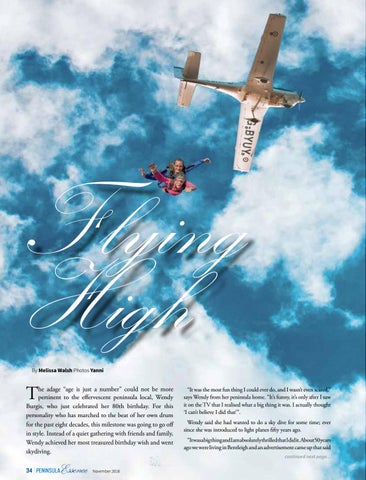 he adage “age is just a number” could not be more pertinent to the effervescent peninsula local, Wendy Burgis, who just celebrated her 80th birthday. For this personality who has marched to the beat of her own drum for the past eight decades, this milestone was going to go off in style. Instead of a quiet gathering with friends and family, Wendy achieved her most treasured birthday wish and went skydiving.

“It was the most fun thing I could ever do, and I wasn’t even scared,” says Wendy from her peninsula home. “It’s funny, it’s only after I saw it on the TV that I realised what a big thing it was. I actually thought ‘I can’t believe I did that’”. Wendy said she had wanted to do a sky dive for some time; ever since she was introduced to light planes fifty years ago. “ItwasabigthingandIamabsolutelythrilledthatIdidit.About50years ago we were living in Bentleigh and an advertisement came up that said continued next page...