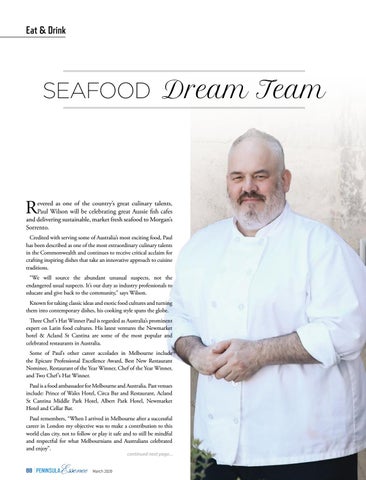 Credited with serving some of Australia’s most exciting food, Paul has been described as one of the most extraordinary culinary talents in the Commonwealth and continues to receive critical acclaim for crafting inspiring dishes that take an innovative approach to cuisine traditions. “We will source the abundant unusual suspects, not the endangered usual suspects. It’s our duty as industry professionals to educate and give back to the community,” says Wilson. Known for taking classic ideas and exotic food cultures and turning them into contemporary dishes, his cooking style spans the globe. Three Chef’s Hat Winner Paul is regarded as Australia’s prominent expert on Latin food cultures. His latest ventures the Newmarket hotel &amp; Acland St Cantina are some of the most popular and celebrated restaurants in Australia. Some of Paul’s other career accolades in Melbourne include the Epicure Professional Excellence Award, Best New Restaurant Nominee, Restaurant of the Year Winner, Chef of the Year Winner, and Two Chef ’s Hat Winner. Paul is a food ambassador for Melbourne and Australia. Past venues include: Prince of Wales Hotel, Circa Bar and Restaurant, Acland St Cantina Middle Park Hotel, Albert Park Hotel, Newmarket Hotel and Cellar Bar. Paul remembers, “When I arrived in Melbourne after a successful career in London my objective was to make a contribution to this world class city, not to follow or play it safe and to still be mindful and respectful for what Melbournians and Australians celebrated and enjoy”.