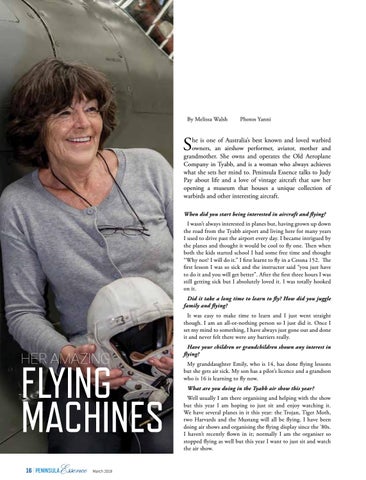 he is one of Australia’s best known and loved warbird owners, an airshow performer, aviator, mother and grandmother. She owns and operates the Old Aeroplane Company in Tyabb, and is a woman who always achieves what she sets her mind to. Peninsula Essence talks to Judy Pay about life and a love of vintage aircraft that saw her opening a museum that houses a unique collection of warbirds and other interesting aircraft.

When did you start being interested in aircraft and flying? I wasn’t always interested in planes but, having grown up down the road from the Tyabb airport and living here for many years I used to drive past the airport every day. I became intrigued by the planes and thought it would be cool to fly one. Then when both the kids started school I had some free time and thought “Why not? I will do it.” I first learnt to fly in a Cessna 152. The first lesson I was so sick and the instructor said “you just have to do it and you will get better”. After the first three hours I was still getting sick but I absolutely loved it. I was totally hooked on it. Did it take a long time to learn to fly? How did you juggle family and flying? It was easy to make time to learn and I just went straight though. I am an all-or-nothing person so I just did it. Once I set my mind to something, I have always just gone out and done it and never felt there were any barriers really.

Have your children or grandchildren shown any interest in flying? My granddaughter Emily, who is 14, has done flying lessons but she gets air sick. My son has a pilot’s licence and a grandson who is 16 is learning to fly now. What are you doing in the Tyabb air show this year? Well usually I am there organising and helping with the show but this year I am hoping to just sit and enjoy watching it. We have several planes in it this year: the Trojan, Tiger Moth, two Harvards and the Mustang will all be flying. I have been doing air shows and organising the flying display since the &#39;80s. I haven’t recently flown in it; normally I am the organiser so stopped flying as well but this year I want to just sit and watch the air show.