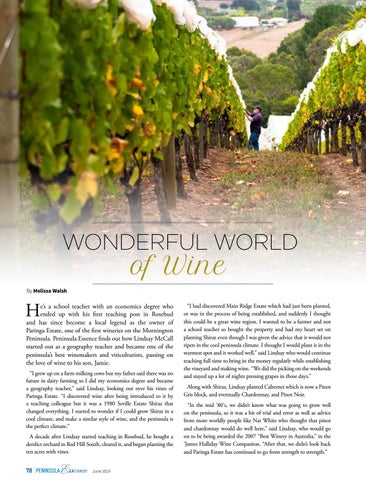 e’s a school teacher with an economics degree who ended up with his first teaching post in Rosebud and has since become a local legend as the owner of Paringa Estate, one of the first wineries on the Mornington Peninsula. Peninsula Essence finds out how Lindsay McCall started out as a geography teacher and became one of the peninsula’s best winemakers and viticulturists, passing on the love of wine to his son, Jamie.

“I grew up on a farm milking cows but my father said there was no future in dairy farming so I did my economics degree and became a geography teacher,” said Lindsay, looking out over his vines of Paringa Estate. “I discovered wine after being introduced to it by a teaching colleague but it was a 1980 Seville Estate Shiraz that changed everything. I started to wonder if I could grow Shiraz in a cool climate, and make a similar style of wine, and the peninsula is the perfect climate.” A decade after Lindsay started teaching in Rosebud, he bought a derelict orchard in Red Hill South, cleared it, and began planting the ten acres with vines.

“I had discovered Main Ridge Estate which had just been planted, or was in the process of being established, and suddenly I thought this could be a great wine region. I wanted to be a farmer and not a school teacher so bought the property and had my heart set on planting Shiraz even though I was given the advice that it would not ripen in the cool peninsula climate. I thought I would plant it in the warmest spot and it worked well,” said Lindsay who would continue teaching full time to bring in the money regularly while establishing the vineyard and making wine. “We did the picking on the weekends and stayed up a lot of nights pressing grapes in those days.” Along with Shiraz, Lindsay planted Cabernet which is now a Pinot Gris block, and eventually Chardonnay, and Pinot Noir. “In the mid ’80&#39;s, we didn’t know what was going to grow well on the peninsula, so it was a bit of trial and error as well as advice from more worldly people like Nat White who thought that pinot and chardonnay would do well here,” said Lindsay, who would go on to be being awarded the 2007 “Best Winery in Australia,” in the ‘James Halliday Wine Companion. “After that, we didn’t look back and Paringa Estate has continued to go from strength to strength.”