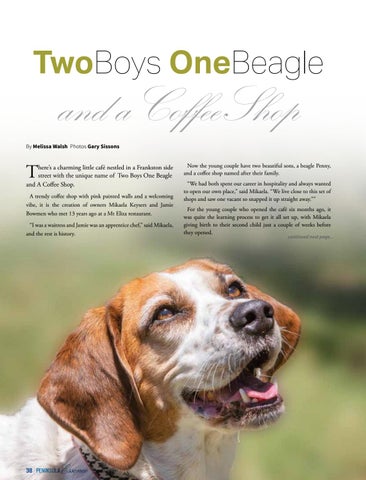 here’s a charming little café nestled in a Frankston side street with the unique name of Two Boys One Beagle and A Coffee Shop.

A trendy coffee shop with pink painted walls and a welcoming vibe, it is the creation of owners Mikaela Keysers and Jamie Bowmen who met 13 years ago at a Mt Eliza restaurant. “I was a waitress and Jamie was an apprentice chef,” said Mikaela, and the rest is history.

Now the young couple have two beautiful sons, a beagle Penny, and a coffee shop named after their family. “We had both spent our career in hospitality and always wanted to open our own place,” said Mikaela. “We live close to this set of shops and saw one vacant so snapped it up straight away.”” For the young couple who opened the café six months ago, it was quite the learning process to get it all set up, with Mikaela giving birth to their second child just a couple of weeks before they opened.